Always a Bridesmaid, Never an Oscar

Both have been here before—many times—and come home empty-handed. Deakins, who shot Prisoners this year, now has 11 Oscar nominations but has never taken home a trophy. Newman, the composer for Saving Mr. Banks, is on his 12th nomination without a win. And they're just the most extreme examples of this year's nominees waiting to hear their names called for the first time: Lone Survivor sound designer Wylie Stateman is on his seventh nomination; five others, including Gravity cinematographer Emmanuel Lubezki (who in my opinion is already due an Oscar for some of the finest cinematography ever in Children of Men), are staring an oh-for-six in the face.

In addition to being really unfortunate for the nominees, this is also relevant information in the neverending quest to predict the Oscars. Many pundits look at longtime losers and give them higher odds of winning, thinking they are "due." The law of averages may be a fallacy, the logic goes, but Oscar voters nevertheless feel sympathy for these perennial bridesmaids, throwing them an Oscar as a kind of lifetime achievement award.

If this is the case, though, how have we ended up with people on their 11th and 12th winless nominations? The "due" argument didn't ring true to me, so I decided to canvass past Oscar results to see if it held any water. It turns out not only that nominees are no more likely to win coming off a losing streak, but also that their chances actually decrease the more the Academy rejects them.

It's a strange paradox. Receiving nomination after nomination suggests that you're an Academy favorite; if anything, that should lead to a better-than-average win rate. But for this exclusive club—people with at least five Oscar nominations in competitive categories—it doesn't always work out that way. The table below shows how many people with at least a certain number of Oscar nominations—let's call the number n—were still winless when they received that nth nomination. The table also compares this to what we would statistically expect, if Oscar winners were chosen completely at random (given that most categories have five nominees per year, "random" is defined as everyone has a 20% chance of winning—and an 80% chance of losing).

For five-, six-, and seven-time nominees, fewer go winless than we'd expect, thanks to high win rates among less veteran nominees. But as the table shows, and as the graph below brings into sharp visual focus, the actual winless percentage quickly overcomes the theoretical winless percentage as we look at Hollywood's most-nominated elite. 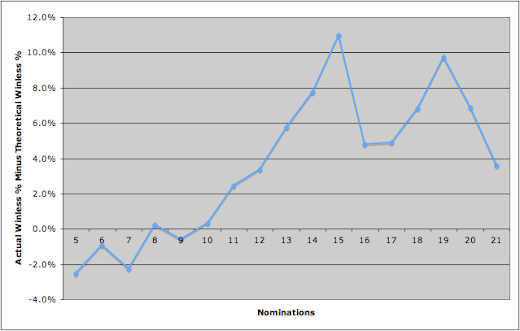 Here, then, is the paradox: after a certain point, continuing to get all that recognition in the form of nominations—yet continuing to lose on Oscar night—actually starts to suggest that the Academy is pointedly not voting for you. Your chances start to shrivel up as early as the 0-for-5 "milestone"; people entering their fifth or higher nomination without a win have historically won that nomination just 13.8% of the time. As you'll see in the table below, that's inflated because nominees have still found success at levels like their sixth and eighth nomination. Someone doesn't truly hit rock bottom until they achieve 10 nominations and zero wins; people on their 10th or higher nomination who haven't won an Oscar by then have only triumphed 6.9% of the time (six out of 87 tries). 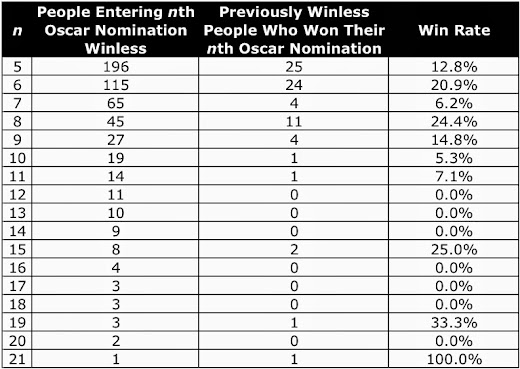 The win rate jumps around a lot because of small sample size, but on the whole it's not pretty—certainly below the randomized 20% benchmark in most cases. The sixth- and especially eighth-nomination win rates are interesting anomalies, suggesting there is a last-gasp window for perennial Oscar losers to prevail before being cursed to double-digit oh-fers. The average win rate on the sixth nomination feels like it is early enough to still fall into the random variance of non-veteran nominees—in other words, it's conceivable that someone could make it to five winless nominations not by being repulsed by voters, but rather just through random chance...and then their turn comes in Round Six. This is the escape hatch through which Lubezki is expected to drop when he wins his first Oscar tonight—and it's why his four other fellow 0-for-5ers have a fighting chance tonight where Deakins and Newman (more on them in a second) do not.

Meanwhile, the high eighth-nomination win rate is driven by an excellent 50% (four out of eight) win rate among actors and directors on their eighth nod without a win—without which this percentage would fall to a below-average 18.9% (seven out of 37). On this, I am open to the theory that Academy voters do throw sympathy votes to famous nominees who are overdue for an award. Acting and directing Oscar nominees are household names, even outside of Hollywood; others, such as sound designers and cinematographers, are decidedly not, even inside Hollywood. Justly or unjustly, it is possible that Oscar voters just don't notice when technical crewmembers go winless, but the omission is far more glaring when it's an auteur or superstar. Eight nominations may simply be the breaking point for this kind of glare. The jury is still out for sure, however, because four in eight is far too small a sample to draw meaningful conclusions from.

There is also some suggestion in the data that, for extremely unlucky nominees (those on their 18th or 19th nomination, or worse, without a win), voters finally do wake up and throw them sympathy Oscars. (Perhaps it just takes 10 or so extra nominations before the media gives the same kind of attention to winless mortals as winless celebrities.) People on the 19th nomination or higher without a win have a 33.3% success rate—two out of six, in absolute terms. However, because of the small sample size at these high altitudes, we cannot be sure if this holds any statistical significance.

Still, overall, people who we would see as "due" for an Academy Award actually fare very poorly. Again, it's particularly evident from the table how the win rate really craters around 10 winless nominations. Returning to the original point of this post, it's bad news for Roger Deakins and Thomas Newman, who fall exactly within the dead zone. People in Deakins's position have historically won just 7.1% of the time, and those in Newman's have in fact never gone home happy. Suffice it to say, you should not be picking either of them in your Oscar pool on the basis that the Academy considers them due. And, appropriately, both of them are considered extreme longshots by pundits to prevail tonight.

Clearly, serial losing is not a coincidence; it suggests there's something about you the Academy doesn't want to vote for. Yet it remains a familiar refrain among Oscar prognosticators that a nominee will win because he or she is due. Occasionally, being due even boosts a nominee's odds of winning in the eyes of the public. But it is just not a valid argument for saying someone will win.

In baseball, if you have an .000 batting average, the smart money for your next at-bat isn't on you getting a hit; more likely, you're just a really terrible hitter. It's no different when it comes to the Oscars. Once you hit 10 nominations and no wins, it's valid to start telling yourself, "They don't like me. They really don't like me!"
Posted by Nathaniel Rakich at 12:29 PM