As a refresher for those of you new around here, every offseason, I comb through that year's free-agent class and assemble the best possible team from it—while working through the same constraints that real teams deal with, like a budget. So far, I have yet to find much success with this exercise (last year's team amassed just 17.0 fWAR, which would theoretically be good only for a 65–97 record), probably reflecting the fact that free agency is a really bad way to build a team. I have abiding hope, however, that this year, with its multitude of team-friendly contracts, might be different.

To build the team below, I went into the winter carrying over my payroll obligations from last year's all-free-agent team, which amounted to $103,083,333 for the nine players in black below. My goal, like most teams' nowadays, was to stay below the $197 million luxury tax cap for 2018, so that meant I had $93,916,667 to spend on two outfielders, a middle infielder, a DH, a backup catcher, a backup outfielder, three or four starting pitchers, and a whole bullpen. The 16 players in blue are who I settled on: 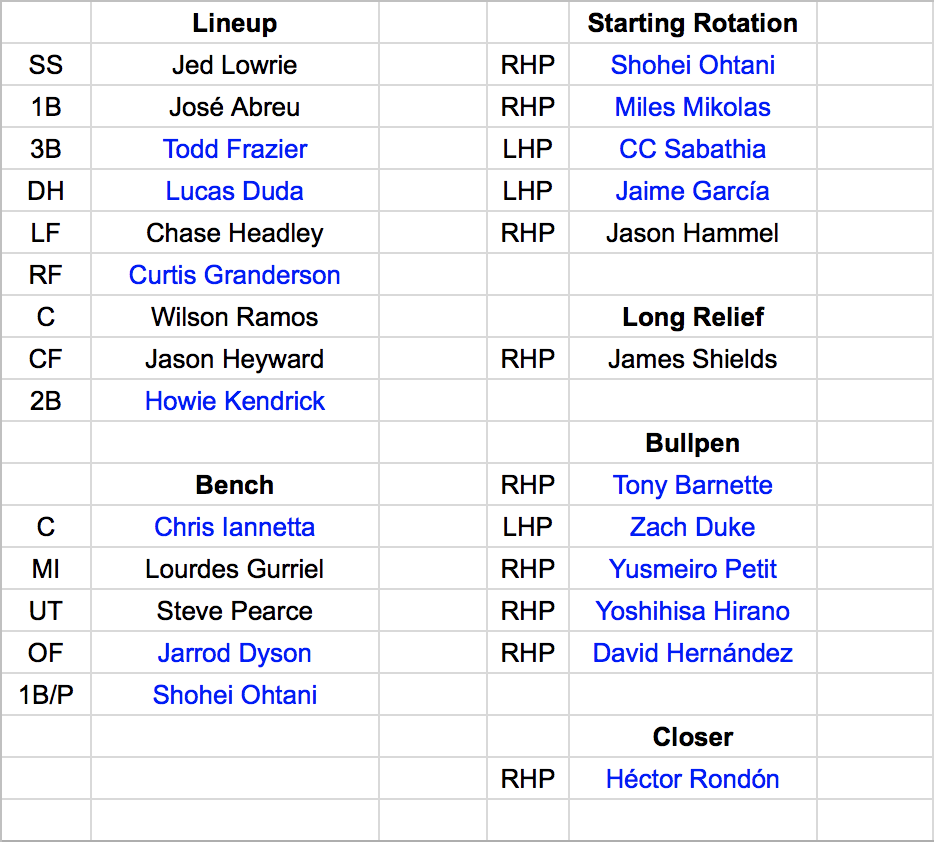 Given that he only cost a $20 million posting fee and a nominal signing bonus, Shohei Ohtani was an easy call, of course. Nippon Professional Baseball is a good source for free-agent bargains in general, though, one I mined for Miles Mikolas and Yoshihisa Hirano as well. CC Sabathia and Jaime García both signed for below-market $10 million, one-year deals. Plenty of talented bullpenners were also available for less than $5 million a year each, including ex-closers David Hernández and Héctor Rondón.

Pretty much my entire offense was plucked from the bargain bin late in the winter. Curtis Granderson was available for $5 million for one year despite averaging 3.5 fWAR over the last three years. Todd Frazier's two-year, $17 million deal was so good that I had to get creative, bumping incumbent third baseman Chase Headley to his original major-league position, left field. Indeed, front offices had so much patience to smoke out free agents this offseason that I blinked before many of the shrewder GMs did. Afraid of being the last one at the dance without a second baseman or DH, I signed Lucas Duda (one year, $3.5 million) and Howie Kendrick (one year, $3 million) only to see even more cost-efficient deals for better players (Mike Moustakas, Neil Walker) materialize later.

Ah well; a team-builder can hardly complain. I was able to construct a viable major-league roster on a final payroll that totaled just $194,593,333 ($209,393,333 in the unlikely event that all contract incentives are met). Now let's just hope they win more than 65 games.
Posted by Nathaniel Rakich at 11:52 PM