Is High Attendance in Miami a Fish Story?

In my last post, I laid out the argument for why the Miami Marlins should be optimistic about their attendance statistics next year. If I do say so myself, it was a convincing argument—with graphs and everything!—but, alas, it is a misleading one. Everything in that post is still correct, mind you, so Floridians should feel free to find a silver lining here. But look deeper into the same data and you'll find that the Marlins' attendance picture is a lot cloudier than the team would like.

As in the last post, it would behoove us to start by looking at the effect of a new ballpark on gate receipts. Here is the pertinent graph from last time: 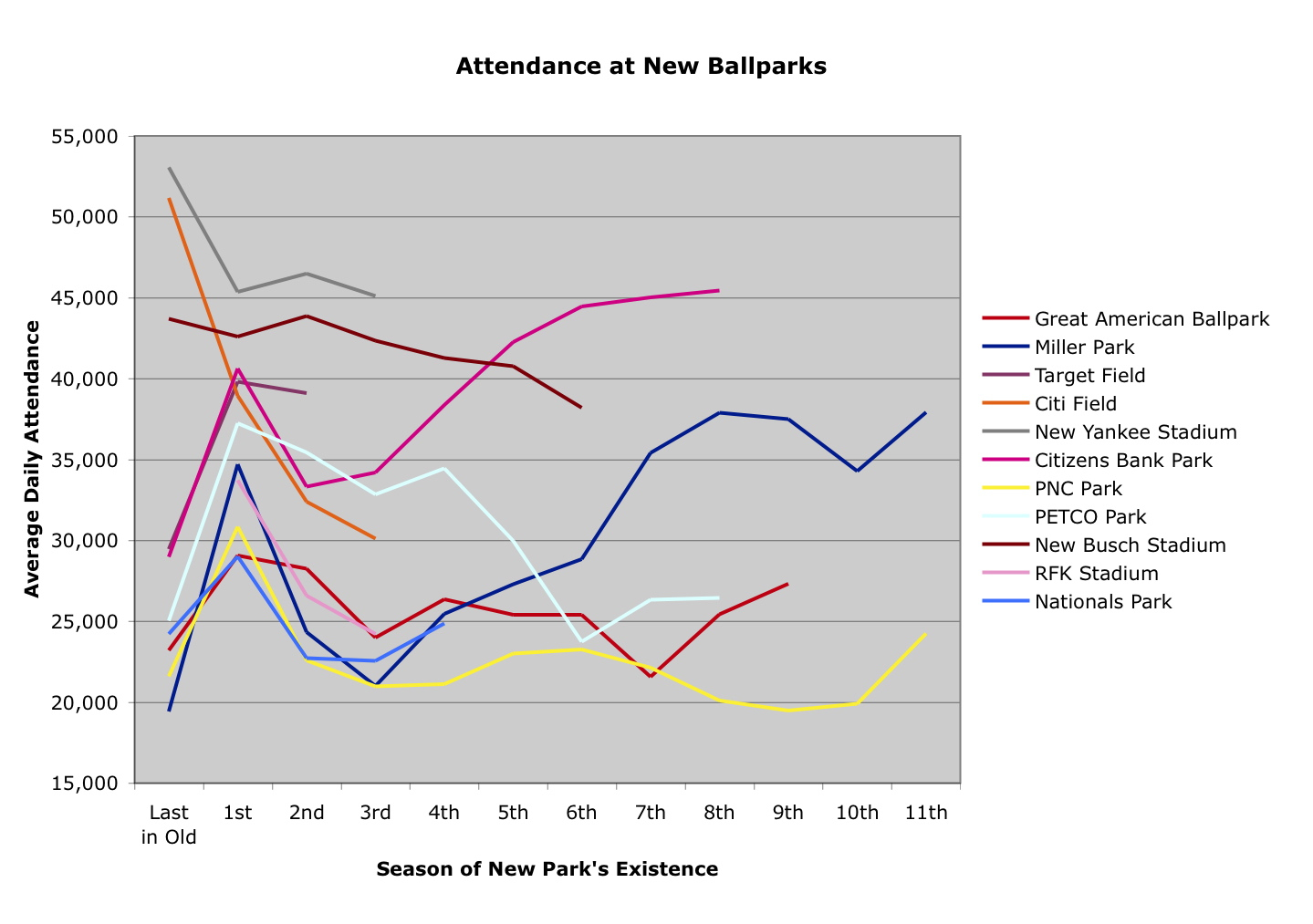 We already discussed the impressive surge that a team receives from a new stadium. Conveniently left out of the "good news" post, however, was the dip back down that typically occurs during the stadium's second season. Just as a new park draws in a median 7,563 new fans per game in its first season, it loses a median 6,290 fans in the second year—essentially, as the graph shows in most cases, returning to square one. The two teams that sustained the increases, the 2010 Yankees and 2007 Cardinals, are both teams with consistently high attendance anyway; unlike the others, they didn't experience a bump when moving into the new stadium to begin with (what doesn't go up won't come down). And oh yeah—they also both celebrated World Series championships in their new parks' inaugural seasons.

For hope in breaking this trend, the Marlins might look to the 2011 Minnesota Twins, whose attendance dipped only slightly from 2010, their first year in Target Field. While it's too early to say if the Twins will be an exception to the rule (Great American Ballpark and PETCO Park both hung in there in their second seasons as well, but they eventually came down to earth), it is encouraging that the Twins have hit nearly 40,000 fans at every Target Field game after failing to crack 30,000 at the old Metrodome every year this century. Miami might hope that its transition from a Metrodome-esque multi-purpose prison to the bells and whistles of not-yet-corporately-sponsored New Marlins Ballpark will produce similar results: a fan base that sticks around due to the sheer attractiveness of the park. I wouldn't hold my breath, though—over the past decade, the Twins have built a rather devoted fan base whose true interest in the team is probably better reflected in the Target Field attendance figures anyway. It seems unlikely that the Marlins, in baseball-apathetic South Florida, have a parallel hidden fan base that is straining to burst out of the woodwork.

This line of thinking got me wondering. Aren't there some teams, such as the Red Sox and Cubs, who simply have a deeper and more devoted fan base than others? Anecdotally, this would certainly seem to be the case, and the suspicion prompted me to take a second look at the correlation between attendance and wins. Although my last post found an extremely tenuous relationship between the two, I decided to isolate for another variable—team—to double-check. Here is a graph showing the correlation between 2001-2011 attendance and wins for all teams in the NL East: 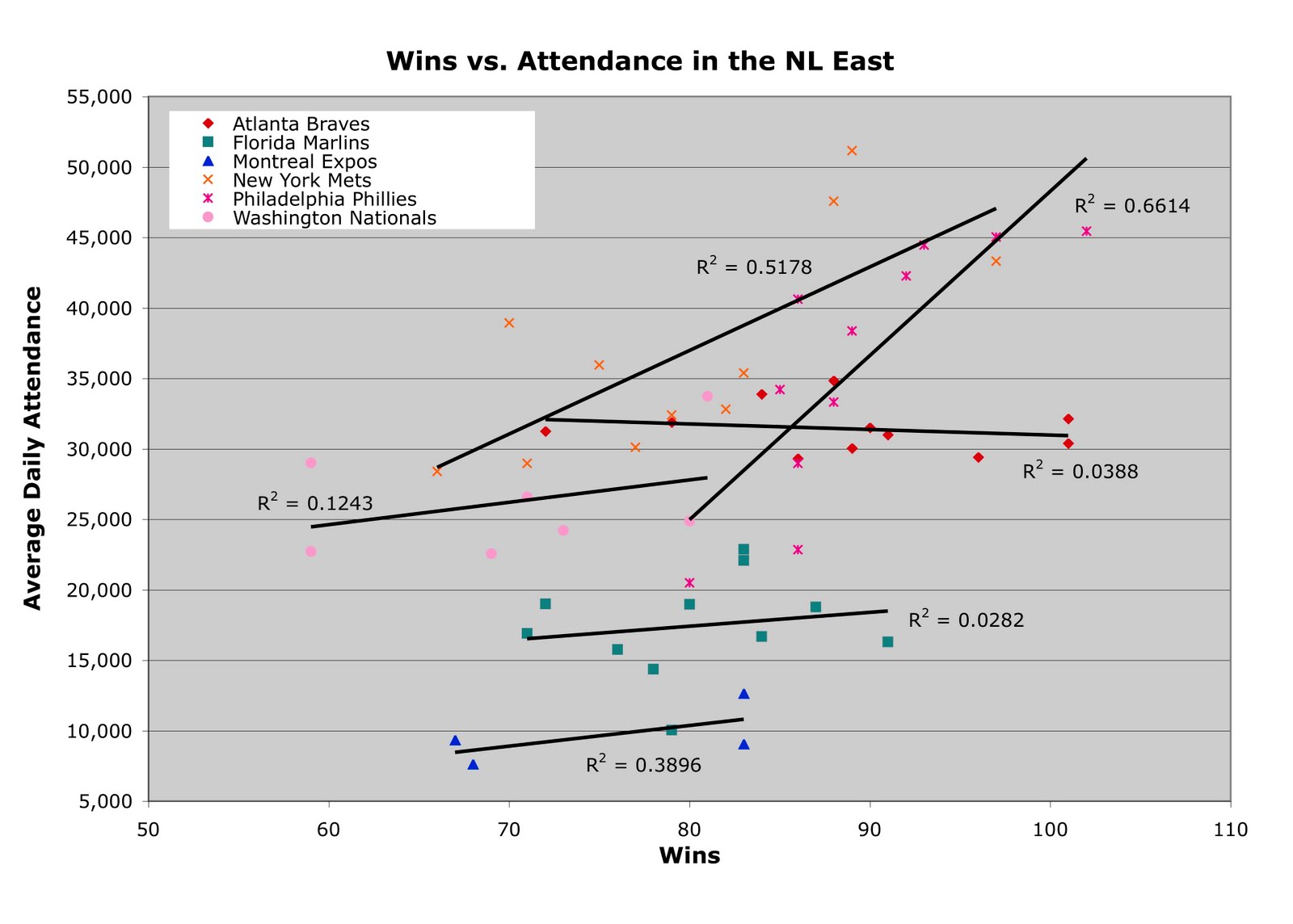 As you can see, four of the teams still show basically no relationship, but two of them show a strong one. The graphs for other divisions show a similar pattern, leading us to a new conclusion. The correlation between wins and attendance is not weak because wins matter only an eensy-weensy bit; rather, it is weak because wins matter quite a bit for some teams and not at all for others. It turns out that there are three types of teams:

1. Perennially Popular. These franchises draw fans by the boatload regardless of the quality of the team they field. In the NL East, the Braves fit this mold, hitting 30,000-35,000 fans per game every year despite a wildly varying win total. Other examples are exactly who you'd expect: the Yankees, Red Sox, Cubs, Cardinals, etc.

2. Bandwagon. Not to say that these franchises have fairweather fans, but they clearly show up when the team is successful and stay home when it's not. NL East examples are the Mets and the Phillies (yes, Philadelphia, I don't disagree with how devoted you are now—but where were you back in the Robert Person era?). Others include the Brewers, Tigers, and Mariners.

3. Fan-Repellant. Lastly, there are the franchises that just can't seem to fill their parks, no matter how hard they try or how much they win. (Well, more accurately, fan-repellant teams often do show a strong relationship between winning and attendance—they just draw 10,000 when they lose, 15,000 when they're OK, and 20,000 when they win.) Again, the list is easy to guess based on conventional wisdom: Tampa Bay and Oakland are the most infamous. Others like Pittsburgh and Kansas City might fit in this category as well, but this is harder to say for certain because they've never been successful enough to create a bandwagon. The NL East is represented in this category by the erstwhile Expos... and the Marlins.

Uh-oh, Miami. For those of you who asked after the last post, "What's the catch?", this is it. But let us not forget that wins never showed themselves to have much of an impact on the Marlins' attendance, even in the optimistic half of this analysis. Surely the other, stronger trends will discredit these categories—say, the combined win total of the previous and current seasons: 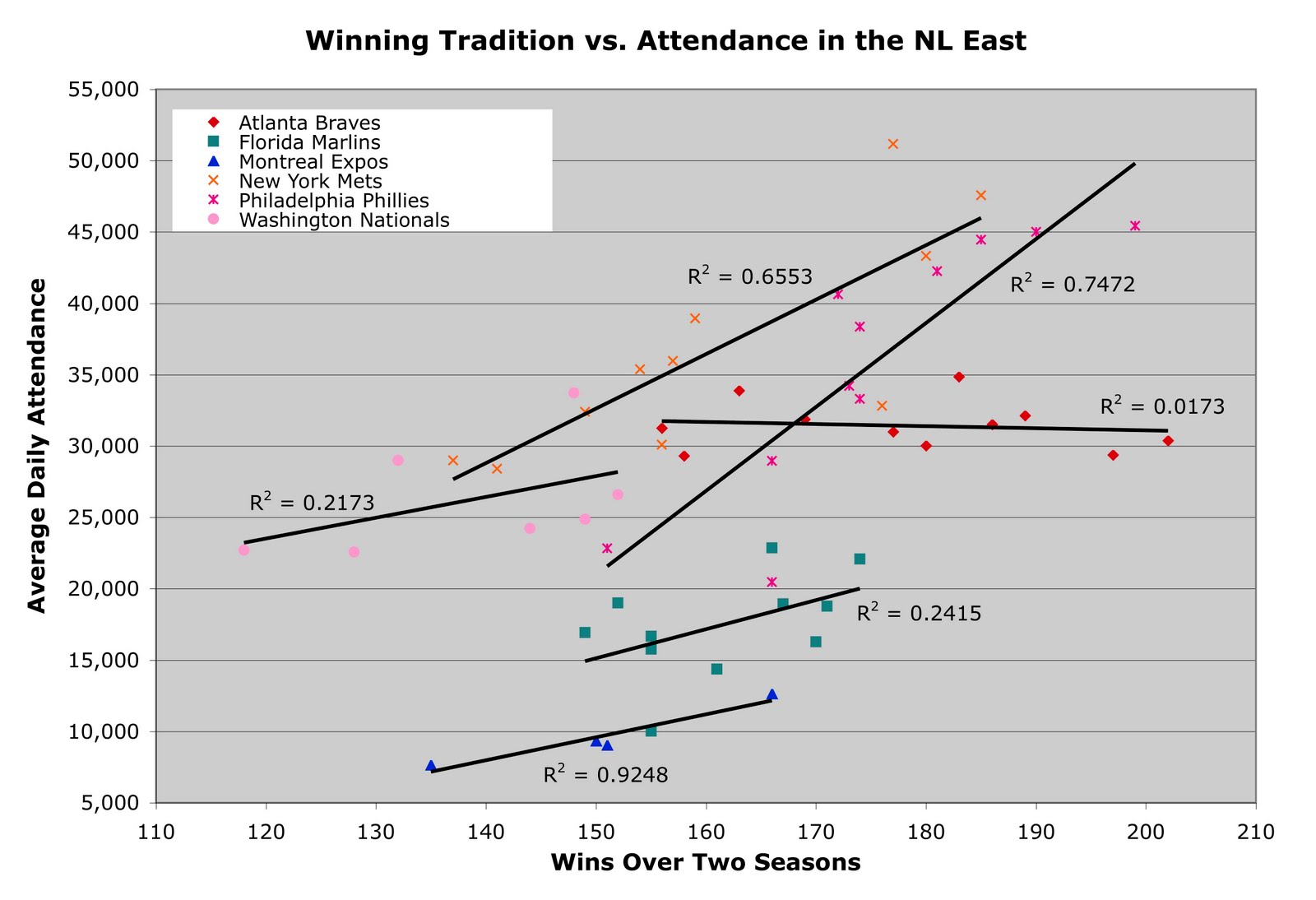 Er, maybe not. Even when using a different variable, the teams still break down into the same three basic categories; we now have confirmation. But just to triple-check, how about the number of wins from the previous season: 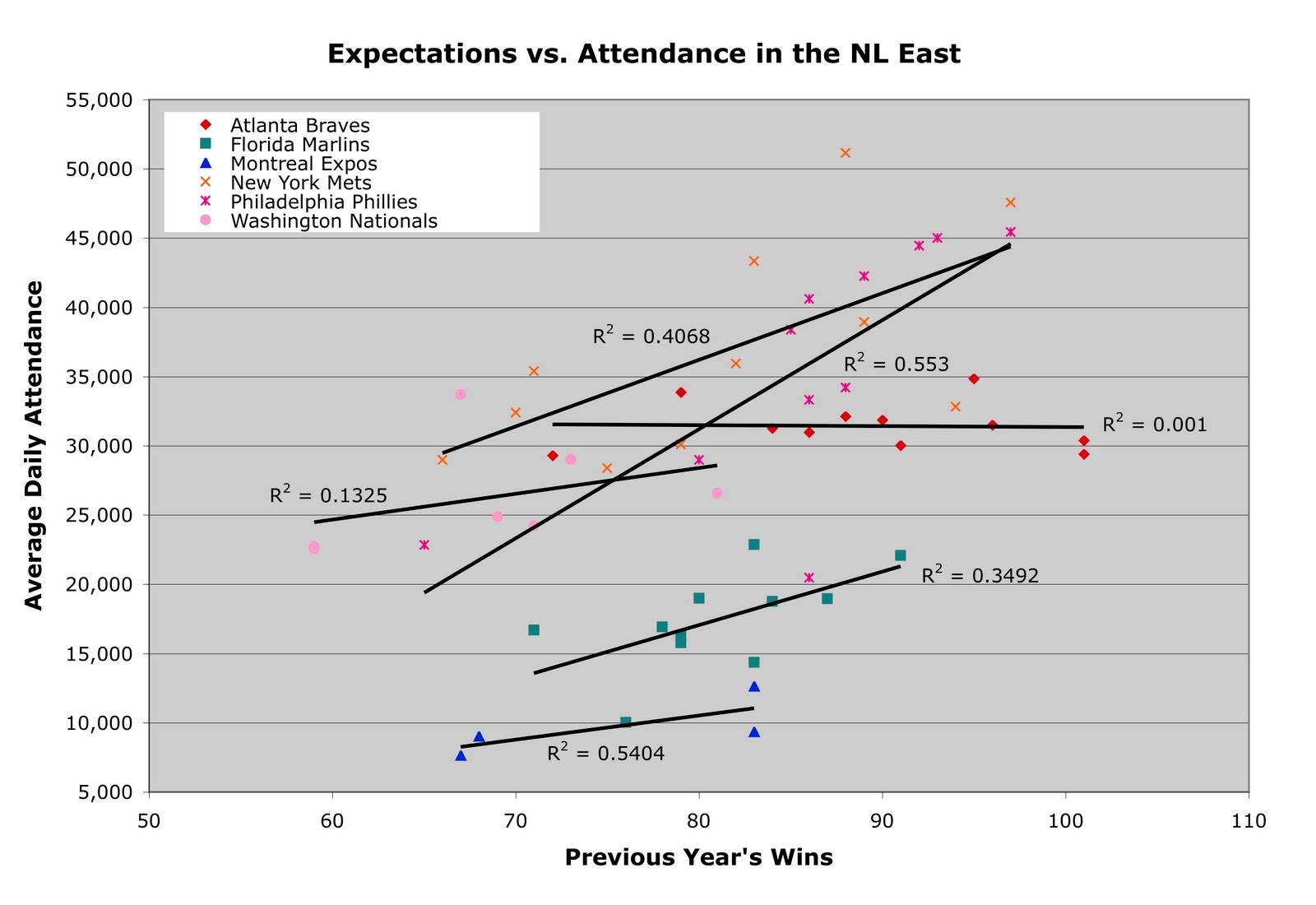 Still the Mets and Phillies have the most significant correlations, and still the Marlins are in the second division of attendance. You probably won't be surprised, then, to learn that hype doesn't position them any better. While the Marlins do have the division's tightest correlation with Vegas odds, it does them little good in trying to draw more fans, in absolute terms, than perennially popular or bandwagon teams: 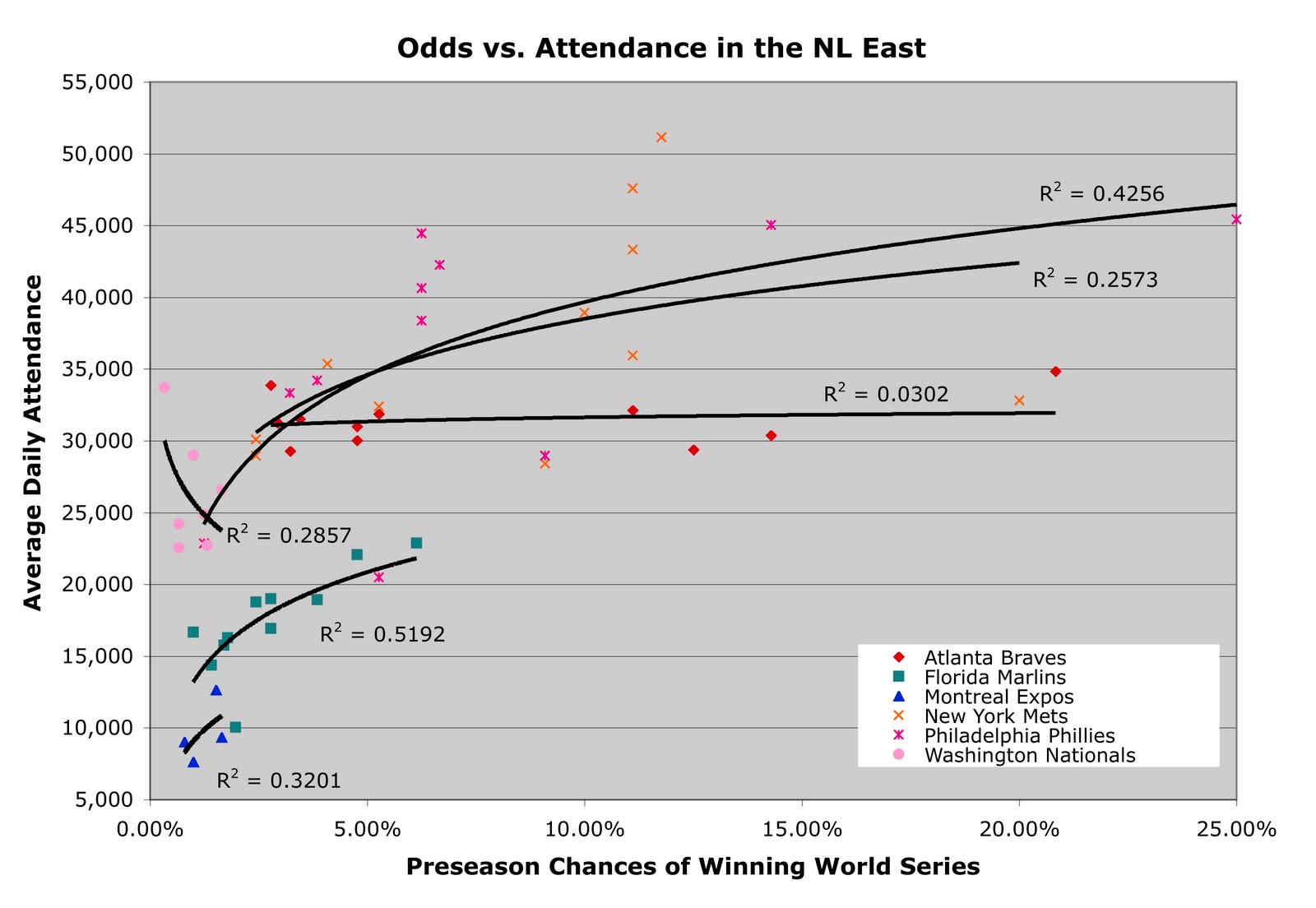 All four graphs show that the Marlins' previously established attendance patterns are only a part of their third-category—"Fan-Repellant"—identity. As much as expectations and especially hype help this team draw, they have never exceeded an average of 22,871 fans per game. According to their attendance-vs.-hype trendline, the Marlins' ceiling—and this would be if they had a 100% chance of winning the World Series—is 35,050 fans per game. Like other teams in the fan-repellant category, they face the problem of far-too-rapidly diminishing returns: gains that are undeniable, yet so incremental that they run out of room to grow.

The graphs drive home a point that my previous post purposefully left out: context. It's painfully obvious from the visuals how many fewer fans the Marlins draw, even when they're on the top of their game, than the powerhouses in New York, Philadelphia, and Atlanta. Even a miserable Phillies or Mets season would be a good attendance year for the Marlins.

So after all that, it turns out that the single greatest determinant of attendance isn't wins, or even hype—it's whether you play in a "good baseball town." To Miamians, that hardly seems fair. So their team is doomed never to attract support? They'll tread water for a few decades and then move on to a different city?

Again, not exactly. I'm reluctant to believe that there are just intrinsic factors about Boston and St. Louis that are nonexistent in Miami or Kansas City. I do think that is part of it: Montréal, for instance, has a completely different culture from American cities; baseball always seemed an awkward fit in separatist, Francophone Québec. And baseball faces an uphill battle in the South (including Florida), where it will probably always take a backseat to college football. But there are cities, such as Pittsburgh or Cincinnati, that used to be "good baseball towns" and yet have faded away in recent years. Likewise, today's "good baseball towns" have not always been so. The possibility at least exists, then, for Miami to develop into a bandwagon team, or even a perennially popular one.

So what long-term paradigm shifts are capable of bumping a team from one attendance-predictive category to another? We can take a stab at it by looking at what each category has in common (other than actual attendance). In a post full of statistical analysis, this is complete theorizing, but here are a few ideas:

2. Dynasties. Many perennially popular franchises are league powerhouses not just for one or two seasons, but for years on end. The longer that something is trendy, the more time it will take to go out of style.

3. History. List the perennially popular teams, and you've got a pretty good approximation of the original AL and NL teams from the turn of the century, especially those that have never been relocated. If your grandfather grew up rooting for the Cardinals, you will too.

4. Marketing. The Red Sox haven't sold out 712 consecutive games just because Boston is the bee's knees. They've developed a masterful marketing plan that involves the now-sacred notion of "Red Sox Nation" and high community involvement on the part of the team.

5. Economy and demographics. I have a feeling that teams like Cincinnati and Pittsburgh would do better if the Rust Belt hadn't been hit so hard during the current recession. The once-proud cities of Detroit and Cleveland are also losing population—and therefore potential customers—at an alarming rate.

6. Geography. Yes, MLB teams in areas with less competition from other sports (college football in the South, hockey in Canada) will have an easier go of it, but, again, it's not insurmountable.

7. Television. Perennially popular teams often seem to have their own TV networks: YES for the Yankees, TBS for Ted Turner and the Braves, or WGN in Chicago. Even the Orioles' MASN might be responsible for bringing more fans to Camden Yards than you would probably expect. Bringing games into people's homes is obviously a great way to build a team's mass appeal.

Some of these are factors that the Marlins can control. Others, unfortunately, are intrinsic obstacles that the Marlins must succeed in spite, not because, of. All of them, though, will take time and patience to develop or overcome—more time than the quick fix of an offseason spending spree. The good news for Marlins owner Jeffrey Loria is that he has actually done everything right so far: built a new park, laid the foundation for a long-term winner, and rebranded the franchise with a new name and new logo. The bad news is that these things alone won't catapult Miami out of the bottom tier. It's going to take more work and a long-term dedication to this plan (something the Marlins have had trouble with in the past).

This has been a pessimistic post for the Marlins. But for the final word on the state of Miami's attendance going forward, we must combine the findings from the earlier post as well. If you take their 15/1 World Series odds, apply it to the tight correlation that Miami-specific attendance has with Las Vegas, and add a ballpark estimate of 10,000 additional fans for the first season of the new stadium, the Marlins should expect to draw 31,909 fans per game in 2012. That's a solid number, especially for a stadium with only 37,000 seats. But in 2013 and beyond, if nothing else is done, that number will fall—even if they sustain those high World Series odds, they'd top out at only 21,909 as long as they remain a third-rate franchise. Such a decline, sadly, would just confirm their reputation as a low-drawing franchise and make it harder for them afford the expensive new players inked at the winter meetings. It's that reputation—and, frankly, that reality—that the team must break with in order to break even.
Posted by Nathaniel Rakich at 6:02 PM