Grantland's Rany Jazayerli ignited a mini-debate on Twitter the other day. The topic: whether good pitching is better to have than a good offense. Jazayerli straightforwardly argued that, in a balanced game like baseball, the two are equally important. If you give up zero runs, true, you can't lose; but you also can't win if you can't score a run.

He's right, technically; a team with an extraordinary offense and exactly average pitching would have the same playoff odds as a team with an average offense but pitching exactly as good as the other team's offense. But the challenge lies in how awkwardly phrased that truism is—how do you compare the quality of an offense to the quality of a pitching staff? It's pretty apples to oranges.

Runs provide a nice common frame of reference by which to measure both hitting and pitching prowess. However, it is not a common scale. In terms of value to a team, runs allowed and runs scored are close, but they are not equal. These days at least, teams at the top of the league in runs allowed do actually win more ballgames than the ones leading MLB in runs scored.

Here are a couple scattergrams for you. The first plots runs scored per game (i.e., offensive strength) against winning percentage for all teams in the Wild Card era. (That's every team from 1995 through 2012—a robust sample size of 534 different data points.) The second plots runs allowed per game (i.e., strength of pitching and defense) against the same. 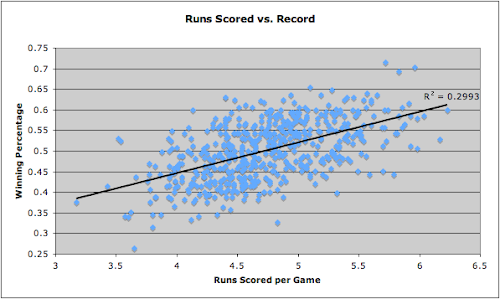 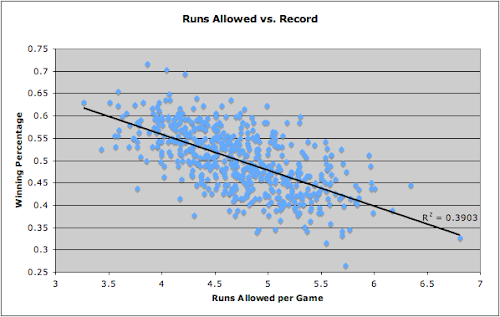 While neither relationship is particularly strong, the runs allowed graph has a higher R-squared—meaning pitching is (slightly) more closely correlated with winning than hitting is.

Let's dive into the specific data points for a closer look. One way to look at them is simply by threshold: how good must your pitching be to guarantee a winning season? Your offense?

Every team that has allowed fewer than 3.77 runs per game has had a winning record in the past 18 seasons; 17 teams fit that criterion. Going out further, only one of the 48 stingiest teams (RA/G of 3.98 or lower) finished under .500—and that was the 2011 Padres, whose numbers were obviously skewed by pitcher-friendly Petco Park. It really isn't until the runs-allowed-per-game number hits 4.20 or so that we start seeing losing teams with any regularity—about the 81st percentile.

This shows that offense has historically been shakier ground on which to build a successful team. The opposite is also true; teams with terrible pitching are bad more often than teams with terrible hitting. Twenty-two of the 23 teams that allowed the most runs per game were losers; two of the four that scored the least were actually winners (the 2003 Dodgers and the 2011 Giants).

But we should also look beyond whether a team wins to how convincingly it does so. In the graphs above, the runs-allowed regression line has a steeper slope, which means that a shift in runs allowed per game has a more drastic effect on wins than a shift in runs scored. We can also compare the average and median winning percentages of the teams with the most runs scored/allowed, the next most, the next next most, etc.:


In most cases, teams' fates were more closely tied up with the pitching; the best teams at run prevention performed better than the best teams at run creation, and, to a lesser extent, the worst-pitching teams also averaged the worst records. Specifically, your excellence held up longer as you move away from the top of the leaderboard if the leaderboard you're on is fewest runs allowed. All this reflects a simple reality of the past couple decades in MLB: there have been more teams with beastly offenses that still lost than teams with filthy pitching that still lost.

What accounts for this slight, but unmistakeable, discrepancy? Excellent hitting should be just as valuable as excellent pitching. My theory is that it still is—but excellent hitting is a lot harder to get than excellent pitching. Obviously, there is a level of offensive prowess that would dwarf any issues on the mound, but that level is up at 1,000 runs scored per season and above. That just doesn't happen very often. Especially in this ERA-friendly era, extraordinary pitching is much more common than extraordinary run-scoring.

Indeed, a lot of those teams with the lowest RA/G—all of them over .500—are from the past couple of years. In contrast, a team from the Obama presidency doesn't crack the list of top offensive teams until slot number 26—below the magic line above which only winning teams dwell.

So, especially in this new dead-ball era, what we're really comparing is excellent pitching and merely great offenses. (The #1 offense in the league in 2013 may be relatively excellent, but on the absolute scale a better adjective is just "good.") It shouldn't be too controversial to anyone that the quality of the pitching overmatches the quality of the hitting in this case.

Indeed, I don't think I'm arguing something as baldly opposed to common sense and baseball truism as it would at first appear. I'm merely saying that the spectrum on which we measure pitching from lousy to average to excellent has a slightly different scale than the one for hitting. And, of course, there's a major disclaimer for any general managers reading this piece: the best baseball teams—and the safest route to MLB success—are a combination of both good hitting and good pitching. But if you have to choose, it turns out an old baseball saying is true after all, in an unexpected way: "Good pitching beats good hitting every time."

Posted by Nathaniel Rakich at 11:35 AM