Primary day in the Boston mayoral election is next Tuesday, September 24, and the field is—to put it mildly—fractured. No fewer than 12 candidates are seeking the rarely available job, and Bostonians are splitting their support almost evenly. This has made polling the race extremely difficult, with few candidates even breaking into double digits and the frontrunner always within the margin of error. Still, the polling is useful to look at in aggregate—so aggregate the polls this post shall, since I don't believe there's a website that currently provides all the race's surveys at a glance. The following list of public polls for Boston mayor (note: these are the "with-leaners" versions of the polls) will be updated through Tuesday: 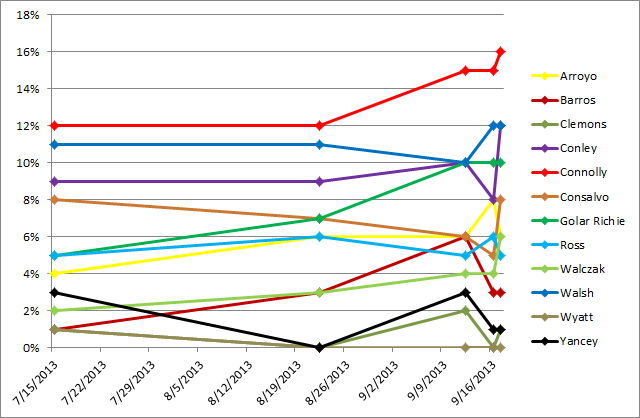 For not a lot of data, this paints a reasonably clear picture of the race. City Councilor John Connolly is almost certainly in the best position, coming in first in all five polls. The battle for the second runoff slot behind him is tight, though; State Representative Marty Walsh and Suffolk County District Attorney Dan Conley are strong contenders, while Charlotte Golar Richie (the race's only woman) has clear momentum. Of course, the big picture remains that the results are unpredictable and that no candidate is more than a couple points out. Although the aforementioned four have to be considered the race's "frontrunners" right now (such as they are), four other candidates (Felix Arroyo, John Barros, Rob Consalvo, and Mike Ross) have been within the margin of error for the second slot in at least one poll. It should be a wild ride leading up to Tuesday.
Posted by Nathaniel Rakich at 7:08 PM