You might've heard there's an election coming up. You probably know it will decide control of the US Senate. If you're lucky, you've heard that a handful of governors are on the ballot too. The US House of Representatives will also be elected, you're told, but those elections don't really matter.

If you listen to professional political handicappers, that's the end of it. In fact, it's not. It may not have the sex appeal of a presidential election, but in this even-numbered midterm, pretty much everything but president is on the ballot: 30 lieutenant governors, 26 secretaries of state, 31 attorneys general, 87 state-legislative chambers, 173 mayors, 144 statewide ballot measures, and even a heck of a lot more. These are the elections that people should truly care about, because these are the elections that truly make the policy that we feel, on the ground, in our daily lives.

Yet these races suffer from a lack of analysis and handicapping. State-based political observers may have a good idea of where the wind is blowing downballot, but they rarely formalize their thoughts into race ratings; meanwhile, big names in forecasting, like Charlie Cook, stick to, well, the big races. It's that gap I want to try to bridge.

I thought about releasing Senate and gubernatorial race ratings this year, as I did in 2012, but I realized anything I put together would just be a reheated take on the conventional wisdom. Leaving the top of the ticket to the true experts, I'm going to try something that I don't think has been done yet for 2014: evaluating this year's state elections below governor and handicap them on the familiar Solid-Likely-Leans scale.

My goal between now and Election Day will be to Cook up (see what I did there?) race ratings for all the state constitutional offices—adjutant general, agriculture commissioner, attorney general, auditor, commissioner of labor, commissioner of state/public lands, comp/controller, insurance commissioner, lieutenant governor, mine inspector, railroad commissioner, secretary of state, superintendent, tax commissioner, and treasurer—that don't get the treatment they deserve and then to classify those races in a language politicos are accustomed to. The ratings will be published to the new "2014 Ratings" tab in the menu above, and each new set will be accompanied by an explanatory blog post. This post announces the debut ratings: those for lieutenant governor.

There are only 11 states to rank for lieutenant governor—a relatively modest lift—so if you'll indulge me for just a bit longer, I'd like to spend more time outlining my methodology for these and future ratings.

First, although I consider quantitative factors, the ratings are qualitative—this is not a model. Unfortunately, with these downballot races, there is scant polling to base a prediction upon, so the ratings are openly subjective. I make the best guess I can based on a combination of factors, including candidate quality (including incumbency), fundraising totals, the overall political climate in the state, and the state's partisan lean. I rank a race as "Solid" if I believe there is simply no evidence that that party can lose that seat. "Likely" means I acknowledge the race is in play, but in my heart of hearts I don't see it going to the other party. "Leans" means I believe a race could reasonably go either way, but I have identified enough of a tilt that I'm comfortable making a call. And, finally, "Tossup" means I simply have no freaking idea.

Each new set of ratings will look like the lieutenant-governor chart below. Each race occupies a row and a column—the row denoting my ranking of the competitiveness of the race, and the column depending on which party currently holds the seat. While columns are binary—a seat is either Democrat-held or Republican-held—rows are a spectrum, going from the most Democrat-favoring race at the top to the most GOP-leaning at the bottom. This allows you to skim down the progressively more competitive races while also seeing, at a glance, which party is playing defense where. Totals in the bottom row and rightmost column give you a summary of the national picture.

Four of these stand for election only in presidential years, while two more stand in odd years. That leaves 11 states holding lieutenant-governor elections in 2014 that are separate from their states' gubernatorial elections and that thus require their own ratings. (I consider the 19 additional lieutenant governors being elected this fall on tickets as already ranked by other handicappers' gubernatorial ratings.) The states are Alabama, Arkansas, California, Georgia, Idaho, Nevada, Oklahoma, Rhode Island, South Carolina, Texas, and Vermont.

Most of these races are snoozers, with no Leans races and only one Tossup. Republicans are heavily favored to win most of the seats, but that has a lot do with the fact that they hold eight of them already. One that maybe they shouldn't hold is Vermont, where Progressive Party candidate Dean Corren is getting $200,000 in public financing (that's a lot for a campaign in Vermont) and where the voters are already among the most liberal in the nation. But incumbent Phil Scott is an old-fashioned New England Republican, and he's beloved in the Green Mountain State; just 4% (!) disapproved of him in a 2012 poll.

Arkansas looked interesting for a time, but ever since Republican Congressman Tim Griffin jumped into the race—and Democrat John Burkhalter faced accusations of workplace violence—the momentum has shifted to the GOP in polls, a microcosm of how Arkansas Democrats have seen their ability to cruise to statewide wins suddenly evaporate in recent cycles. With Griffin's $433,980-to-$42,541 cash-on-hand lead, this one is barely on the fringe of competitiveness now. If we're judging by fundraising, there are actually two red-state races that Democrats have better shots in. In South Carolina, 30-year-old Bakari Sellers (D), the son of a local civil-rights activist, has raised almost as much as Republican Henry McMaster and has 2.8 times his cash on hand. In Texas, State Senator Leticia Van de Putte (D) is as good a candidate as Dan Patrick (R)—who previously called himself Dannie Goeb and hired undocumented immigrants to work at his bar, despite today referring to immigration as an "invasion"—is a bad one. Van de Putte has raised a million dollars and has $1.2 million on hand (outpacing Patrick in both measures) but has struggled to gain traction in polls (she was most recently down 46% to 26%).

In the end, the only truly exciting LG race—and it is quite exciting indeed—is the one in Nevada. Democratic Assemblywoman Lucy Flores and Republican State Senator Mark Hutchison are vying for the open seat; it's universally agreed to be the most important downballot race in the country because a Republican victory could encourage Governor Brian Sandoval to challenge Majority Leader Harry Reid in 2016. There has been no polling in the race since the primary, but the candidates together had raised almost $900,000 through only June 6 (the next campaign-finance report is due October 14). Flores has the benefit of a great story and the backing of Reid's political machine, but Hutchison has Sandoval's coattails. The race is unpredictable right now, and given Nevada's close political divide, it's an obvious candidate for "Tossup" status. 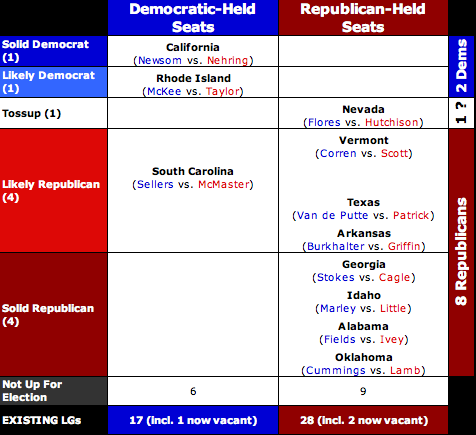 Posted by Nathaniel Rakich at 8:43 AM