As any member of an organized political party will tell you, they're really not all that organized. My home state of Massachusetts is one of several places where one-party rule has caused the political divides that really matter to be intra-party ones. (Kansas is another example.) When outsiders make cracks about how liberal and/or monolithic Massachusetts is, they're showing how little they know about the Democratic Party's extreme factionalism there. In actuality, the party's seemingly giant legislative majorities (36–4 in the State Senate, 125–29 in the State House) are more the result of British-style coalition building between several smaller parties, sometimes with very different identities and policies but yet all, for reasons practical to historical to programmatic, considering themselves Democrats.

Hoping to pen a more ambitious analysis of these subparties in my home state, I canvassed every endorsement issued in the Massachusetts Democratic primary this cycle for the four contested statewide races: governor, lieutenant governor, attorney general, and treasurer. (In a state with one-party rule, after all, the primary dictates which clan sits on the throne for the November coronation.) Unfortunately, the data ended up being too thin to expose the detailed fault lines I wanted to map out, so my original idea for this post fell by the wayside. However, there's still a place for the data that do exist, so I'm leaving them here for Massachusetts political junkies to play with.

Any Democratic politician or organization that endorsed this cycle is listed in this Google doc—also embedded at the bottom of this post. You can see whom they endorsed in each of the four major races. Most only endorsed in one or maybe two races (that's why the data was too thin), but if they endorsed in three or four, their full voting slate is laid bare in that spreadsheet.

Just for fun, we can cross-analyze how much endorsements line up with each other. Do all Tom Conroy for treasurer supporters also support Warren Tolman for attorney general? (Yes, it turns out, but not all Tolman supporters support Conroy.) This gives us a tease of some of the aforementioned Massachusetts Democratic factions—witness, for instance, how endorsements for progressives Don Berwick and Maura Healey line up pretty well—but mostly it's just a confusing mess.

In the chart below, the rows represent the universe of people we are considering to calculate the percentages (i.e., the denominator), and the columns represent the characteristic being measured within that universe (i.e., the numerator). Read the chart by asking, "What percentage of [row] are [column]?" So, for instance, you can find what percentage of Steve Grossman endorsers also endorsed Steve Kerrigan by going to the Grossman row and the Kerrigan column. Percentages are out of the people who endorsed in both the former and latter races being considered, not just in the former race; as a result, percentages all add to 100% and there is no cell for "[Candidate] endorsers... ... supporting no one." Endorsements of withdrawn candidates, like Joe Avellone, don't count for chart purposes (even though they're listed in the spreadsheet for comprehensiveness).

In the chart, read down a column to see the percentage support that a given candidate got among universes of different endorsers (and compare it to the share of the race's total endorsements received by that candidate, displayed in the bottom row); read through a row to see how endorsers of a given candidate split their support in the other three races (useful if you're undecided in one of the races and want elite support to guide your vote).

Spot any interesting patterns? Leave them in the comments! 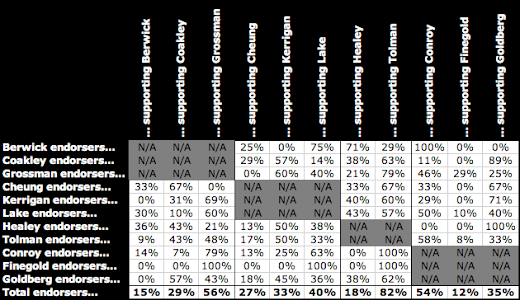 Posted by Nathaniel Rakich at 8:50 AM