Teaching the Far Right a Lesson: 2014 Race Ratings for Superintendent

"Education" is the issue voters will tell you they care more about than any other—yet "superintendent of public instruction" is lucky to be the sixth-best reason someone casts a ballot. You should reconsider that, at least this year, if you live in one of the surprisingly many states where that office is up for grabs. This year, the office is on the ballot in seven of the 13 states that elect superintendents, although only six of the elections are partisan. All six are taking place in deeply Republican states, and all six are currently held by Republicans... Yet Democrats are seriously contesting arguably every single seat.

How is this possible in a year when the national mood seems so dour for Democrats? It's easy when the lineup of Republican incumbents is the following all-star team of the most unscrupulous, outlandish, and unhinged politicians in the country. One turned her office into a war zone where people feared for their safety; one exploited special-needs kids for political gain; one had a secret, xenophobic online identity. Even the ones who behaved themselves have often left behind unpopular legacies of funding cuts and lower-quality schools. Although none of the six incumbents is running again (two lost in the primary), their memory lives on in these unexpectedly close races.

In many cases, the candidates to replace them are no peaches themselves. What is it about state superintendent that seems to attract the craziest "wacko birds" to the job? Education has become the newest culture war in America, with debate especially raging around the Common Core standards, which, depending on who you listen to, are either an attempt to make an American education meaningfully similar across geographic and income lines or a conspiracy to indoctrinate kids with a liberal worldview dictated by the federal government. While the Common Core controversy is new, the thought that our kids are our most vulnerable and controllable assets has been around forever. Those drawn to the position of superintendent are often not professional politicians, but activists around this very issue. My personal theory is that the GOP's inattention to these downballot races has allowed the right wing to hijack many of them, which here in 2014 is coming back to hurt the party. (Although, it should be noted, an equal factor in making these races so competitive this year is the inherent strength of many of the Democratic candidates themselves, widening the gulf in candidate quality so much that even staunch partisans have had to take notice.)

Below are my race ratings for the 2014 superintendent races; more in-depth explainers can be found after the jump. For a rundown of my methodology, see my September 26 post; for full downballot race ratings as they become available, surf to my 2014 Ratings page. 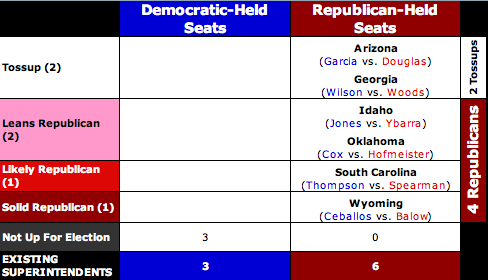 In sum, Democrats have an excellent chance to cut into the six-to-three Republican advantage among school chiefs who affiliate with a political party (those in California, North Dakota, Washington, and Wisconsin are elected nonpartisanly).

Arizona: Tossup
The award for worst candidate of the cycle has to go to Arizona Superintendent John Huppenthal (R). During his primary against Common Core opponent Diane Douglas, he claimed he "never" supported the standards—despite speaking on record about the need to implement them two months before. And apparently never didn't mean never, since the following week he insisted he had been misrepresented and actually did support Common Core. Oh, but what really killed him politically was probably making anonymous discriminatory comments on a blog. In a tearful news conference, Huppenthal admitted that he wrote that welfare recipients were "lazy pigs" and lobbied for Spanish-language media outlets to be banned. Douglas swept him away in the primary, but then Republicans faced a new problem: they had a no-name, single-issue crusader as their superintendent candidate. Democrats, meanwhile, nominated well-respected professor David García, who has gained traction even in this red state with establishment Republicans, such as the local Chamber of Commerce and past Republican superintendents. García is well funded, too, with almost $800,000 in independent expenditures (mostly by Stand for Children and Restore Education Funding Now) having been spent to help elect him.

California: Tossup
This unique race doesn't make the table above because it's technically a nonpartisan election. Even if we acknowledged that we all know better, though, this race is actually between two Democrats—a product of California's top-two primary system. Incumbent Tom Torlakson faces a spirited challenge from former charter-schools executive Marshall Tuck in what is, for my money, the most interesting superintendent race in the nation. Rather than focusing on Common Core like most of the races on this page, the election is over the identity of the Democratic Party's education plank: should it protect teachers and unions, or should it support charter schools? Tuck is in the latter camp, but many of the state's old-guard Democrats are fiercely resisting. The state's powerful unions are spending millions to re-elect Torlakson, who has fought the recent Vergara v. California court decision that struck down teacher tenure in California. In the closing days of the campaign, $5.5 million will be spent by independent-expenditure groups on both sides. The last poll taken in the race showed that it was still anyone's game, with Tuck at 31%, Torlakson at 28%, and 41% undecided back in September. Given that both sides have shown that no price is too steep for this seat, it would be crazy to say this race is anywhere near predictable. (However, after this video, it was tempting to say the campaign was over, everyone pack it in, we're done here.)

Georgia: Tossup
According to the Atlanta Journal-Constitution, "If you want to lay a wager on the Democrat who might be celebrating election to a statewide office on the first Tuesday in November, don’t place your money on Michelle Nunn or Jason Carter"—bet on Valarie Wilson, the Democratic candidate for state superintendent. Wilson checks every box for the Democratic base: she is African American; she has deep community ties across the state as the former president of the Georgia School Boards Association; she has a good relationship with teachers as a former school board member in Decatur. She's even been endorsed by the outgoing Republican superintendent, John Barge. Republican candidate Richard Woods has staked his campaign on opposition to Common Core, but with only $9,094 in the bank, he can't get that message out. Georgia is still Georgia, so Wilson isn't running away with it, but ample polling in the race has shown (a) this is a race people are engaged in, with few undecideds, and (b) the candidates enter the final week statistically tied.

Idaho: Leans Republican
In former deputy Idaho superintendent Jana Jones, Democrats have pretty much their best possible candidate—at least for someone who hasn't waged a winning statewide campaign before. Jones ran for the job before, in 2006, and lost to Republican Tom Luna. If you've heard that name before, maybe it's because of the "Luna laws"—a series of education reforms that Luna shepherded through the legislature in 2011 that basically read like a how-to manual for destroying teachers' unions. Even in this deep red state, voters were outraged at the attack on teachers, and they voted to repeal the laws via popular referendum in 2012. Luna is retiring this year in semi-disgrace, but that hasn't stopped Jones from linking him to GOP candidate Sherri Ybarra. Ybarra wasn't even supposed to be here; just your run-of-the-mill high-school principal, she somehow emerged the winner of a Republican primary that featured three better-known, better-funded candidates. Ybarra has run the kind of rocky campaign you'd expect from a political novice—plagiarizing her website (off her opponent, no less), claiming to have forgotten key details of her past marriages, and admitting she has voted in just two of the last 17 elections. ("My brain doesn't operate in the past," she offered as her excuse.) She normally wouldn't be in the same league as the well-connected Jones, who has raised five times the cash—but this is Idaho, remember. It's difficult for any Republican to blow an election here, although with her lead down to 41–38 in an October PPP poll, Ybarra seems to be doing the best she can.

Oklahoma: Leans Republican
Republican Superintendent Janet Barresi was first elected in 2010 as a supporter of Common Core. Then Oklahoma became one of the first states to banish the standards. Awkward. Although Barresi "evolved" to oppose Common Core, she was vulnerable in 2014, and she finished third in a three-way primary. (Don't feel too bad for her—Barresi allegedly shared the personal information of special-needs students she had gotten scholarships for with her campaign team in an effort to curry political favor with their families.) Instead, Joy Hofmeister, a former member of the state board of education, is carrying the Republican mantle. Hofmeister is the best Republican candidate we've met thus far: though anti–Common Core, she is an accomplished woman—a CEO who raised a solid $771,434 for her campaign. I'd be comfortable listing her as the favorite... if it weren't for actual, honest-to-goodness polls showing her tied with or losing to Democrat John Cox, the superintendent of the Peggs school district. Cox has effectively combined discontent with education cuts with a local-control-is-best approach popular with conservatives. However, I give the nod to Hofmeister as the candidate in better position (and on friendlier turf) to close the deal.

South Carolina: Likely Republican
Finally, a race that behaves like it's supposed to. The election for South Carolina superintendent of education has unfolded pretty typically: Democrat Tom Thompson supports Common Core; Republican Molly Spearman opposes it; the Republican's message resonates better in a state where Newt Gingrich won the presidential primary. However, the race's only poll doesn't foreclose the possibility of an upset—Spearman led by 10, but the pollster claimed her support was soft. However, Thompson still hasn't posted a third-quarter fundraising report on the South Carolina website, suggesting he hasn't raised enough money to trigger a report; if so, you can stick a fork in this one.

Wyoming: Solid Republican
Politics has plenty of eccentric characters, but I'd put Cindy Hill up against anyone. The outgoing superintendent was first elected in 2010 and immediately set about making her office a living hell. Hill struck fear into the hearts of her employees with incidents like waving a knife around as she was cutting an office birthday cake and holding "cultish" loyalty meetings. Employees became so paranoid that she was listening in on them that they began to speak in code words. Baseball bats and bear spray were brought into the office for protection; one veteran said he preferred serving in combat to under Hill. When these allegations went public, Hill was suspended from the department, setting off a constitutional crisis that ended with Hill unsuccessfully primarying Governor Matt Mead. To continue on her legacy at the state education department, Hill endorsed her deputy, Sheryl Lain, in the 2014 election while non-insane Republicans preferred Bill Winney in the primary. Naturally, then, a third candidate, teacher Jillian Balow, won the GOP nomination. She's enough of an outsider that voters appear to trust her to rebuild the department, as she leads 45% to 26% in the race's only poll. However, Democrat Mike Ceballos is a strong candidate who has the support of two popular ex-governors—and who has a bipartisan history of working with the state's Republican government. The former CEO has raised twice as much money for the race as Balow. Still, he doesn't have much time left in which to spend it; his best shot might have come and gone when Lain lost the primary.
Posted by Nathaniel Rakich at 8:21 AM