The Severalest Fans in Baseball

A few weeks ago, we learned that the US Supreme Court would take up a case deciding the meaning of "one person, one vote." Thankfully, in Major League Baseball, we have no such restrictions. Fans can vote dozens of times for the All-Star Game, with the result this year of 620 million ballots cast—a record.

Around this time of year, and with the Final Vote well underway, I always wonder which teams have the biggest voting blocs behind them. (For example, are there really that many Royals fans out there, or is something funny going on?) The exact number of fans who swear allegiance to each MLB team is the holy grail for marketing executives, advertisers, statisticians, and baseball psephologists alike; hard numbers are elusive and ever-changing. However, a number of sources exist from which we can estimate fan-base population; there may not be a baseball Census, but it has its own American Community Survey equivalents.

In exploring this same question last year, I sifted through a few of these datasets, from Facebook data to the annual Harris baseball poll, before settling on state-by-state polling data from Public Policy Polling (PPP). PPP, run by my friend and huge sports fan Tom Jensen, is known for administering its political surveys with a side of quirkier questions: voters' favorite Great Lake, their concern about falling into sinkholes, and, of course, their sports allegiances. In my 2014 post, I used PPP's data to estimate how many millions of fans rooted for each team.

A year later, it's time for an update. PPP has polled more places, and it has released more up-to-date data in others. As of July 6, 2015, PPP has polled 35 states on their baseball preferences, accounting for 79.0% of the US population. I collect its findings and input them regularly into this Google spreadsheet. Multiply the percentage of respondents by each state's population, and voilà: raw numbers for each fan base.

Here in 2015, in the four-fifths of the country that we've snapshotted, the largest fan base belongs to the Atlanta Braves, with over 22 million fans. The smallest, at barely a million, belongs to the poor Mets, so at least there are fewer of them to be miserable. Here are the numbers for all 30 franchises:

*PPP only polls in the United States; the Blue Jays probably do have only a handful of American fans, but obviously they don't belong at the bottom of this list given their millions of fans north of the border.

(Careful readers will notice that these numbers are dramatically larger than the estimates I published last year. That's due to a slight but crucial methodological change from last year: using total population—specifically, 2014 estimates from the US Census Bureau—as my multiplier, not the number of voters. Last year, I went strictly by the sample that PPP tested: usually registered voters, occasionally likely voters. Because our democracy is really sad, this looked at a much smaller pool of fans. This year, I decided that the share of Red Sox vs. Yankees fans in Connecticut really probably wouldn't be that different among registered voters than among the total population, so I took the liberty of assuming the poll spoke for everyone in the state. This gets us a lot closer to our goal of describing the fandom of every American.)

This methodology has its limitations—most glaringly, the 15 states (plus Canada and the District of Columbia) that are not included, simply because PPP hasn't polled on baseball there. While we've made progress from last year's analysis, adding three new states, the Braves, Cubs, White Sox, Nationals, Orioles, Phillies, Yankees, Mets, and Red Sox are still likely to be undersampled based on the missing states (shaded in red below). That leaves the Tampa Bay Rays as the likeliest smallest fan base. 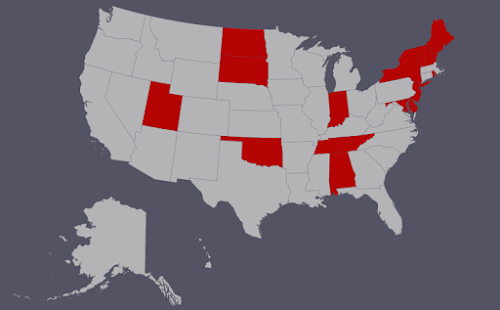 Still, it's exceedingly clear that the Braves, Red Sox, Cubs, and Yankees, in some order, have the most fans in baseball. This could bode well for Brett Gardner or Xander Bogaerts in the Final Vote. Keep an eye on the excellent county-by-county vote maps that MLB puts out during Final Vote week to see where baseball's electoral clout lies.
Posted by Nathaniel Rakich at 9:58 AM