How Many Fans Does Each MLB Team Have?: The 2016 Baseball Census

No one can possibly know exactly how many fans there are of the San Francisco Giants or the Toronto Blue Jays. The best we have are rankings of MLB teams by popularity, and even those disagree sometimes. To solve that problem, a few years ago, I developed a method of quantifying how many fans each MLB team has—a baseball census, if you will. This allows us to answer the question of not only which team has the largest fan base, but how large it is.

Whenever they poll a state, our friends over at Public Policy Polling (PPP) ask about more than just politics: barbecue, giant meteors, and, yes, baseball. Using PPP's state-by-state breakdowns of baseball fandom and multiplying by the actual Census Bureau's latest population estimates for each state, we get the U.S. population of each fan base:

*Blue Jays fans are drastically undercounted because PPP does not poll in Canada.

Since last year, PPP has asked about baseball in three additional states, including big ones like New York and Maryland, giving this year's numbers their best accuracy yet. As a result, the New York Yankees have seized the title of America's favorite team, with an estimated 23,789,450 fans. Also moving up in my rankings, for the same reason, are the Mets (now at 7,237,208 fans) and Orioles (4,602,667). The Royals, meanwhile, have gained about a million fans since last year—pretty much all due to bandwagoning fans in updated polls from Missouri and Iowa. The Braves, Red Sox, and Cubs join the Yankees in baseball's Big Four; no other team comes within seven million fans of them.

Of course, the data are still incomplete. Our census/PPP's polls now cover 38 states, or 87.5% of the U.S. population—but that means 12 states (plus the District of Columbia) and one-eighth of Americans aren't accounted for. Here's a map of which states are still missing: 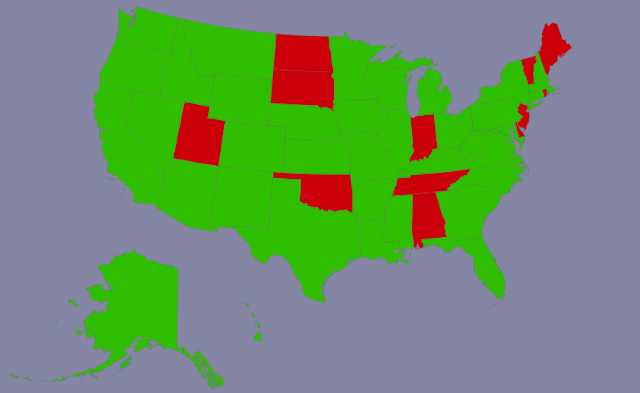 The Red Sox look like they could still be underrepresented; three New England states are missing. The Braves will also undoubtedly gain when Alabama and Tennessee are eventually added. But Yankees fans in New Jersey and Cubs fans in Indiana are also undercounted. While the raw numbers of my top four teams should be a little higher, we can be fairly confident that the increases will be proportional.

In the name of full disclosure, other factors may be throwing off the numbers as well. PPP's baseball questions are worded in an opt-in manner, so the 78% of Americans who tell them they have a favorite baseball team is much higher than the 42% of Americans who are baseball fans. Therefore, this may inflate fandom across the board. However, the nature of polling also limits PPP to asking about just eight or so teams per state. Not asking every state about teams that could conceivably have national fanbases, like the Dodgers or Tigers, could be undercounting them as well. The bottom line: with the data at our disposal, the above numbers are the most accurate enumerations we have.

So we think we know who MLB's most popular teams are. But what's the least popular team in baseball? Although the Blue Jays have only about 211,264 American fans, they clearly enjoy more popularity than that in Canada. Instead, it appears that MLB's two least popular teams both reside in Florida, a state that has always polled better for out-of-state teams like the Yankees and Braves than for the Marlins and Rays. Here in 2016, the Marlins appear to have the "advantage" in the race to the bottom, a switch from last year, when PPP's 2015 poll of Florida indicated that the state had slightly more Marlins fans than Rays fans. And unlike for the Nationals (DC is missing) and White Sox (Indiana), there is no state missing from our dataset that seems likely to give those two fanbases a boost. Like between the four at the top, it's a close race for last, but there can be no question it's between those two teams.
Posted by Nathaniel Rakich at 11:23 AM