Baseball Teams are Hiring the Best and Brightest. That's a Problem Now?

Ken Rosenthal is not anti-intellectual. He's a graduate of the University of Pennsylvania, a progressive thinker, and hip to the use of advanced metrics in baseball. So it was strange when he penned a column expressing trepidation at the trend of MLB teams hiring more and more Ivy League general managers.

In fairness, that's not all the column was about. I agreed with many of the things that Rosenthal says: that a person's connections shouldn't matter more than their merits in the hiring process. That baseball has a diversity problem among both its field and general managers. That the other major hiring trend in baseball, hiring managers with little or no coaching experience, is head-scratching. But Rosenthal's column wrongly conflates these issues with the intellectual elite's presence in front offices.

I too believe that experience matters when hiring a manager, and I too hate it when shrewd baseball minds like Dave Martínez or Torey Lovullo are continually overlooked in favor of popular ex-players. But the general managers responsible for the inexperienced-manager fad are predominantly not Ivy Leaguers, but rather the old-school GMs. Since Kenny Williams (an ex-player) kicked it off in 2011 by hiring Robin Ventura to manage the White Sox, only three out of 11 inexperienced managers were hired by Ivy League GMs:
It's natural to associate, as Rosenthal does, the old-school GMs with the experienced coach and manager crowd, but the facts bear out that it's actually ex-player GMs who prefer these ex-player managers. Meanwhile, new-school GMs have hired managers such as Joe Maddon, Rick Rentería, Bobby Valentine, John Farrell, and Jeff Banister. The popular narrative of a toothless field manager taking orders from his boss's spreadsheets is the exception rather than the rule.

Rosenthal is right: the idea of discouraging dissent, or at least diversity of opinion, by hiring your like-minded friends is counter to the spirit of the sabermetric movement, which is supposed to be open-minded and encourage the scientific method of always questioning hypotheses. That's why it shouldn't surprise that the hiring process of "who do you know?" has been a staple of Major League Baseball for decades. In the days before intellectual dominance of baseball, it was even rarer for teams to hire anyone, no matter how impressive their credentials, unless they were old playing buddies of the baseball staff or old drinking buddies of ownership. This reality is lamentable, but it's not new.

And, not too long ago, it was impossible to be hired by a major-league team if you weren't white. Yet Rosenthal connects baseball's lack of diversity to the new Ivy League revolution rather than decades of institutionalized racial exclusion. The first black field manager didn't arrive until 1975; general manager, 1977. Those embarrassing facts come about precisely because baseball's old-boys club was so incestuous in its hiring—creating a vicious cycle where team staffs were white because everyone they knew was white.

Yet Rosenthal falls back on the popular stereotype that the Ivy League is the institution that is truly white and preppy: "Even though the Ivies and other schools aggressively recruit underrepresented minorities, their campuses are not as diverse as American society at large." This statement is not only false, but it's not even hard to disprove. Thanks to financial-aid policies that have grown incredibly generous and a fanatical drive to recruit minorities in order to maintain their relevance in today's diverse society, Ivies are now just as socioeconomically diverse as other colleges and as the country as a whole—if not more so: 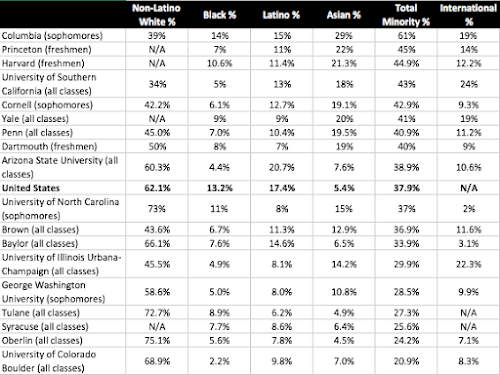 (I'll stop you right there—yes, Ivies have a lot of Asians. Yes, they do count as minorities. Chinese- and Japanese-Americans have less well-known but still extremely ugly histories in this country. And while Ivies could do better among black and especially Latino applicants, they still outperform most other American universities.)

I recognize that I may be biased; I'm an Ivy grad myself. But I'm still capable of seeing that there is plenty to criticize about Ivy League institutions and its graduates without resorting to lazy caricatures. The white skin, or ill-conceived trades, or bad attitude of a few executives who happened to graduate from the Ivy League shouldn't paint a picture of the entire eight-school consortium. While Rosenthal didn't quite go this far, his column opens the door to anti-intellectualism with its broad brushstrokes. It's easy for the casual reader to draw the conclusion that everything Rosenthal (and I) lament are the fault of a cabal of privileged nerds.

When the greed of Wall Street led to the Great Recession in 2008, many correctly blamed the Ivy-educated suits at the big banks. But if you hate Hank Paulson because of where he went to school, you should equally credit Harvard for giving us the comedy of Conan O'Brien, the genius of Neil deGrasse Tyson, and the philanthropy of Bill Gates. In reality, the Ivy League deserves credit/blame for none of these people. The actors themselves are accountable for their own actions. It was a privilege for all of us—Hank, Conan, Neil, Bill, and I—to attend such an excellent school, but it did not make any of us privileged. Our very different backgrounds before college, and the arrogance or humility with which we comported ourselves after it, decided that.

You might want to sit down for this, there are still some snotty, overprivileged people at Brown, Dartmouth, or Yale. There are some bad eggs. But we're not all like that, I promise. As we've seen, these campuses are diverse, which means they are home to every kind of person under the sun—good and bad. The vast majority of the people I met in college were good people with ideas to make the world either a better or more interesting place. The 20% of Princeton students who are selfish and entitled may go on to seek power in Washington, DC, or money on Wall Street, but the rest go off to lead other, less evil industries: starting nonprofits, writing books, becoming teachers, and more.

A small fraction even decide to go into baseball, because that's what they are passionate about. They apply statistics to the sport because that's what they're good at and what they can contribute. And the good ones work hard to put themselves in a position to become a GM years down the line. (No owner is just hiring whiz kids to run a team right out of college.) This new wave of GMs isn't being hired because of where they went to school. They're being promoted because they are good at their jobs.

Rosenthal acknowledges that, saying he doesn't have a specific issue with any one new GM hire. "It's the pattern that troubles me," he writes. But if it's a pattern of, in Rosenthal's words, people with résumés "quite sufficient for his new position" getting jobs, what is so troubling? There's nothing inherently wrong with an Ivy Leaguer having an "inside track" to a front-office job. The fact is that most graduates of elite schools are extremely capable and smart, and more often than not, capable and smart people are going to get hired. They'll also, more often than not, be the ones to rise to the top. Not every smart and capable person went to an Ivy, of course—many people who didn't have the opportunity to go to a top-tier college, or any college at all, are just as smart and often even more hard-working—but at the upper echelons of management, you can't be surprised when the Ivy League is overrepresented. That's not a problem. It's a reasonable byproduct of a merit-based hiring process.

And as long as that hiring process remains merit-based (and doesn't turn into a new version of the insiders-only network that existed in old front offices—a valid concern), smart people will always have jobs in baseball regardless of their background. Rosenthal laments the fate of scouts and executives who aren't facile with the new math of baseball. While I agree that their old-school insights remain valuable, they also must be intellectually curious enough to accept the sport's new discoveries. If they, like so many conservative baseball minds do, refuse to keep up with progress in their industry, then there is no more place for them in it. But there is no reason the old generation of front-office staff shouldn't be able to adapt to the changing times, like baseball old-timers Peter Gammons and Rosenthal himself have done. If they are smart and keep an open mind, no Ivy Leaguer worth his salt would replace them.
Posted by Nathaniel Rakich at 10:39 AM

Email ThisBlogThis!Share to TwitterShare to FacebookShare to Pinterest
Labels: Baseball