One of the lucky few with a vote for NL Cy Young? May God have mercy on your soul. In a year of several close awards races, this is the mother of them all. In their own ways, Clayton Kershaw, Zack Greinke, and Jake Arrieta have all reached historic heights this season. Do you prefer impeccable peripheral stats? Kershaw (and his soon-to-be 300 strikeouts) is your man. Or is straight-up run prevention your thing? Go with Greinke and his 1.68 ERA. Want a mix of both, perhaps with a flair for the dramatic mixed in? Vote for Arrieta, the author of the game's most recent no-hitter.

It all comes down to how you assign responsibility for run prevention. We know that the pitcher doesn't control who scores off him all on his own; luck and the quality of his defense play a role. But it's also foolhardy to claim that a pitcher's stuff has no effect whatsoever on the efficacy of batted balls. We know that the truth lies somewhere in the middle—but we don't know exactly where. So, unfortunately, in order to answer the question in front of us—who has been the best pitcher in the National League?—you pretty much need to answer the biggest open question that sabermetricians still have about the game.

In the past, for awards voting specifically, I've favored using actual runs allowed. Although I know that FIP is more predictive (i.e., if I were signing either Kershaw or Greinke to a free-agent contract, I'd choose Kershaw since he's more likely to be able to replicate his performance), ERA tells you what actually happened, and awards are supposed to be recognitions of what you accomplished—past tense. However, this year, I've gotten hung up on another part of that logic—the word "accomplished." Although fewer runs scored on Greinke's watch than Kershaw's or Arrieta's, how much of that can we really count that as his "accomplishment"? The Cy Young Award is supposed to isolate pitching ability, and Kershaw and Arrieta have stronger claims to legitimate personal pitching accomplishments. So I find myself in the same old dilemma.

Where is the best place along the spectrum to plant your flag? 70% pitcher, 30% fielders? 40% pitcher, 60% fielders? For now, it comes down to a personal judgment call. But the good news is that, if you've made your personal choice about how you value run prevention, your NL Cy Young vote is pretty much decided. In fact—much like those old magazine quizzes that told you how good of a lover you are based on how clean you keep your room—there's even a chart you can use.

A relatively new feature on FanGraphs is a WAR leaderboard that can toggle between FIP-based WAR, RA9-WAR, and a 50-50 mix of the two. (FIP-based WAR gives a pitcher credit for only the peripherals he clearly controls, like strikeouts and walks; RA9-WAR gives a pitcher full credit for run prevention.) Among NL pitchers, Kershaw dominates if you think fielders prevent runs; Greinke wins if you think pitchers do; and Arrieta emerges as a compromise candidate if you split the difference. (Note: stats have been updated as of Monday, October 5, so they are final.)

We can be even more specific; this is a spectrum, after all, not just two endpoints and a midpoint. Assuming that WAR changes linearly, we can calculate each player's WAR assuming any level of FIP-versus-RA9 split: 50-50, 70-30, 12.35-87.65, etc. Think of it as a sliding scale where each player's WAR shifts up or down as you change how you value pitchers' contribution to run prevention. 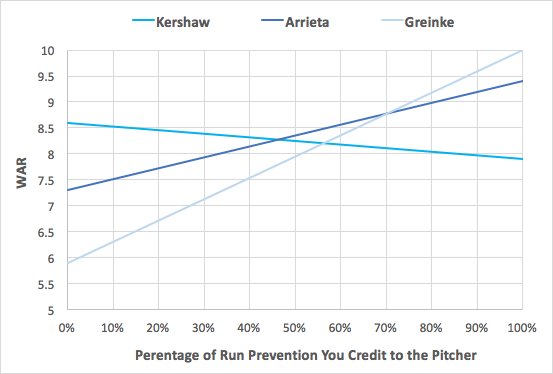 The chart above helps us visualize what this means for the Cy Young vote: that the identity of the most valuable pitcher changes depending on your starting assumption. Whoever's line tops the chart is the rightful Cy Young winner for that range of percents. We can even pinpoint the exact place on the run-prevention spectrum that one pitcher ceases to be the most valuable and another begins: by finding the intersection of their two lines.