It's the moment of truth for Hall of Fame watchers. Tonight at 6pm Eastern, the results of this year's election will be announced. Exit polls of over 200 ballots, dutifully collected by Ryan Thibodaux, provide hope for some candidates and great suspense for others—but they can also mislead. As I explained last week, a polling "adjustment" is necessary to arrive at final projections of Hall vote totals.

For several years, my projections, based on historical deviation between public and private ballots, have been some of the most accurate estimates around. With 208 of an estimated 450 precincts reporting, I now issue my not-quite-final-but-close-enough predictions for 2016. (I say not quite final because Ryan's ballot tracker may add handful more votes before 6pm, which I will add to my projections on this Google spreadsheet. Follow me on Twitter for real-time notifications.) In an extremely close election, I'm forecasting two players will be added to the baseball pantheon.

Ken Griffey Jr. and Mike Piazza are easy calls. At 100% and 86.1% of public ballots and projections of 97.0% and 82.0%, respectively, they have a large margin of error in case the polls for them are wrong. For a long time, I projected that they would be joined in the Class of 2016 by Jeff Bagwell, but he has been slipping steadily in the polls for the last several days. Just this morning, he passed under the 75% threshold in my projections (though he remains at 76.9% in Ryan's tracker.) However, every poll has a margin of error, and at 74.4%, my Bagwell projection is easily within that range. It's no exaggeration to say that this is the closest Hall of Fame election we've witnessed in the exit-poll era. While my model does expect him to fall just short, more fundamentally it is akin to when a polling model says an election is 50% to 50%: it's too close to call.

Tim Raines is an easier call, in my opinion. Though he is at a similar 76.0% in the exit polls, he has historically lost much more ground than Bagwell once private ballots are accounted for, with drops of −13.4%, −13.3%, and −11.5% the last three years, yielding a projected adjustment factor this year of −12.7%. Bagwell, meanwhile, has seen deviations of −10.7%, −3.5%, and +0.4% the last three years. Many observers dismiss Bagwell's chances of election this year because they expect his vote totals to drop an amount similar to Raines's, as happened last year, but I think this is a hasty assumption. Bagwell was never anathema to private voters the way Raines was until last year, meaning we should probably treat that as an outlier. This is even more true because of the purge of many of the BBWAA's most conservative voters this year. I find it unlikely that Bagwell's drop among private voters will do anything but decrease from last year's figure after this reform.

The purge is already likely responsible for the huge increases that my model predicts for Bagwell (+18.7 percentage points), Raines (+14.2 points), and many others, especially Edgar Martínez (+19.4 points), Mike Mussina (+19.5 points), and Alan Trammell (+17.5 points). These would be among the biggest year-to-year improvements in Hall of Fame history; for them all to happen in the same year is no mere coincidence. Trammell is in his 15th and final year on the ballot, so he will drop off next year regardless, but this year is poised to put not only Bagwell and Raines, but Martínez (forecast at 46.4% in his seventh year), Mussina (forecast at 44.1% in his third year), Trevor Hoffman (forecast at 64.8% in his first year), and Curt Schilling (forecast at 54.5% in his fourth year) in great position for enshrinement sometime in the future. Despite wide speculation that many of the most virulently anti-PED voters were also purged, steroid poster boys Barry Bonds and Roger Clemens are expected to gain only 5.7 and 4.3 points, respectively, from last year's totals—important boosts, but not really out of the ordinary in the historical record.

At the bottom of the ballot, I project that two notable players will drop off the ballot by failing to reach 5% support: Nomar Garciaparra and Jim Edmonds. However, both are expected to have more backing among private ballots than among public ones, and so an invisible wave of support could save either one. When dealing with such small sample sizes (an estimated 23 votes are necessary for a player to survive onto next year's ballot), a small error can make a big difference. One of my personal favorite players, Billy Wagner, is also at some risk of dropping off, although I predict he will safely hit the cutoff with 8.9%. Other than the obvious, one of the things I'm most curious about tonight is how Wagner and his fellow ballot-rookie closer, Hoffman, fare compared to their standing in the polls. I wrestled with this a lot for my projections and ended up deciding that Hoffman will overperform by about five points, while Wagner's haul would remain steady.

Below are my full projections. My full methodology can be read here. Good luck to all the candidates. NOTE: The numbers below were updated as of 5:55pm on January 6 to reflect all 213 ballots made public before the announcement. They no longer match the text above. 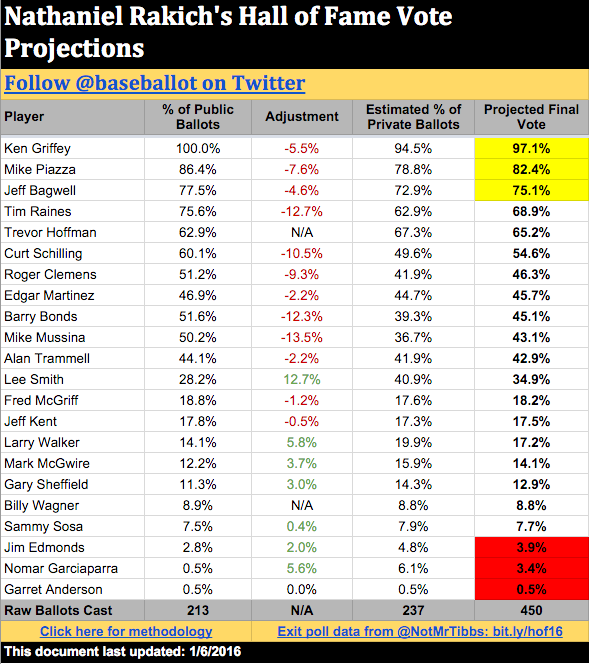 Posted by Nathaniel Rakich at 5:14 PM