What We Learned From This Year's Hall of Fame Results

I lost the coin flip.

On Wednesday night, two players—Ken Griffey and Mike Piazza—were lucky enough to join the pantheon of baseball's elite. I had predicted that Jeff Bagwell, by literally the narrowest of margins (0.1 percentage points), would join them. At that margin, though, I knew it was a coin flip, and, ultimately, Bagwell fell short.

That miss soured a great year for my overall Hall of Fame projections. The mean and median error of my projections was just 1.5 percentage points—my best mark yet in four years of doing this, and almost half the average error I experienced last year. I was also much more consistent this year, nailing eight players' percentages within one point and missing by more than three points on just one player: 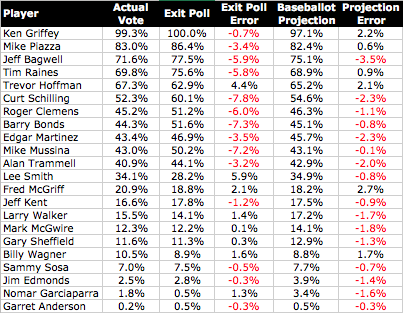 Unfortunately, that one player—my biggest miss—was Bagwell: the one player whose fate was actually uncertain, and therefore the one for whom people needed Hall of Fame models the most. My off-kilter shot at him was also particularly glaring because, in a world that focuses mostly on the binary of "elected" and "not elected," I wound up on the wrong side. I can't help but feel like I failed when the one player I misled people on was the one they cared about the most.

Bagwell's showing really and truly surprised me, however. His drop from public ballots to private ballots was a whopping −11.4 percentage points—even bigger than his drop last year, which itself was uncharacteristically large for him (prior to 2015, Bagwell did about the same among public and private voters). This was even more shocking because of this year's purge of the most conservative voters from the BBWAA rolls. I was worried that my projections might prove inaccurate because they overstated drops; never in a million years did I imagine that I would understate them.

Yet I did, and not just for Bagwell. Roger Clemens and Barry Bonds also both dropped by more this year than last—again, odd, because conventional wisdom was that a lot of anti-steroid moralizers had fallen victim to the purge. Alan Trammell also dropped among private voters, despite gaining among this population last year, but I wasn't fooled; because my projections account for the last three years of public-private deviations, I correctly foresaw the direction, if not quite the magnitude, of his drop. Meanwhile, Fred McGriff did the opposite, gaining with private voters this year after suffering from them last year. (This demonstrates why, despite many suggestions that my adjustment factors rely more heavily on recent years' election results, I have stuck with a straight multi-year average.)

That said, many candidates were indeed helped by the purge. Most obviously, candidates like Bagwell, Tim Raines, Edgar Martínez, and Mike Mussina gained huge amounts of ground from last year's totals. But Mussina, Raines, and Curt Schilling were also among the players whose historically huge drops from public to private ballots were blunted a little bit this year. Their increasing acceptance with the private electorate (still a majority of voters) is crucial for their hopes of eventually being elected.

The moral of the story is that, after all that wondering we did about how the purge might affect the public-private differential, it really didn't make a huge difference. Public and private ballots ended up being purged about equally.

Other loose ends: I was worried about predicting the two new relief pitchers on the ballot, Trevor Hoffman and Billy Wagner. I needn't have been. Both ended up following the familiar reliever pattern (see Lee Smith's +11.4 public-private differential this year, which was actually smaller than expected!) of gaining votes with private voters. In fact, I should have been even more aggressive in predicting this, as they were two of the rare players my projections lowballed.

Thank you to everyone who followed along with me this Hall of Fame season, especially those who helped, encouraged, or shared my work. I want to give credit where credit is due: First, any contribution I make to the science of Hall of Fame forecasting is due entirely to Ryan Thibodaux, without whose BBHOF Tracker of public ballots none of this would be possible. I owe a lot of my record accuracy to Ryan, who this year uncovered a far greater percentage of ballots (thus reducing the possible error) than ever before. And I am hardly alone in putting out Hall of Fame forecasts every year; two other forecasters of exceptional skill include Ben Dilday and Tom Tango. Ben's median error of 1.5 percentage points this year matched my own, and Tom's was not far behind at 2.4 points, despite both basing their predictions off a smaller sample of public ballots. If you like my projections, give them some love too.
Posted by Nathaniel Rakich at 9:29 AM