The Oscars Really Do Spread the Wealth Around

If it's February, it's time to indulge in hobby-making over a different kind of election here at Baseballot: the Academy Awards. Notoriously difficult to predict due to a lack of hard data and polling, the Oscars often force prognosticators to resort to fickle historical precedents, working theories, and, worst of all, gut instinct.

One of those working theories is that the Academy of Motion Picture Arts and Sciences likes to "spread the wealth around." The idea is that the Academy has many favorite people and movies that it would like to honor, but it only has a limited number of awards to bestow, so it tries to sprinkle them around strategically so that everyone deserving gets a prize for something. At first, it seems a stretch of the imagination to think that a disparate voting bloc could be so coordinated and strategic in its thinking. Academy members aren't making decisions as a unit; their results are an aggregation of thousands of individual opinions. However, the Academy is still a smaller and more homogenous electorate than most, and their preferences may reflect the groupthink of the Hollywood insiders who dominate their ranks. Sure enough, a dive into the data shows that the Academy may indeed lean toward distributing the wealth evenly.

One of this year's hottest Oscar races is that for Best Actor. Will Casey Affleck join the club of Oscar winners for his portrayal of a Boston janitor in Manchester by the Sea, or will Denzel Washington take home his third trophy for hamming it up in Fences? If you believe that the Oscars spread the wealth around, you'd probably lean toward Affleck—and history suggests that's a good bet. At the last 15 ceremonies, a past Oscar winner has gone up against an Oscar virgin 47 times in one of the four acting categories (Best Actor, Best Actress, Best Supporting Actor, and Best Supporting Actress). A full 32% of nominees in those 47 races were past winners, so, all things being equal, past winners should have won at around an equal rate. However, all things clearly were not equal, as those past winners prevailed just seven times out of 47: 15%. Looking at the same data another way, they won just seven times out of their 75 nominations—a 9% success rate. That's far lower than a nominee's default chances in a five-person category: one out of five, or 20%.

Some caution is still warranted, though. Oscar history is littered with famous counterexamples: the time two-time winner Meryl Streep (The Iron Lady) stole Best Actress from underneath the overdue Viola Davis's (The Help) nose at the 2011 ceremony, or when Sean Penn (Milk), a prior winner for Mystic River, edged out Mickey Rourke for The Wrestler at the 2008 awards. In addition, the converse of spreading the wealth isn't necessarily true. Even if the Oscars make a concerted effort to keep extra statuettes out of the hands of people who already have them, they probably don't bend over backward to reward undecorated artists who are "due."

Finally, there may be a difference in wealth-spreading between the acting categories, where the nominees and their records are well known, and the craft categories, where the awards are thought of as going to films, not people. This can explain the wide inequalities in categories like Best Sound Mixing. Sound mixer Scott Millan has won four Oscars in his nine nominations, and legendary sound engineer Fred Hynes won five times in seven tries. By contrast, Greg P. Russell, nominated this year for mixing 13 Hours, has compiled 17 nominations and has never won. And the all-time record for most Oscar nominations without a win goes to mixer Kevin O'Connell, who is a 21-time nominee, including his bid this year for Hacksaw Ridge. Unfortunately, both will almost certainly lose this year to La La Land mixer Andy Nelson, who has two wins in his previous 20 nominations. Even if this isn't because of the longstanding trophy inequality in Best Sound Mixing, it is certainly consistent with it.

Within each ceremony, the Academy also appears to spread the wealth fairly evenly among movies. Of the last 15 Oscars, seven can be considered "spread the wealth" ceremonies, while only three can really be considered "sweeps" (2013 for Gravity, 2008 for Slumdog Millionaire, and 2003 for The Lord of the Rings: The Return of the King); five are ambiguous. Granted, this is a subjective eyeballing of the data, but I have some hard numbers too. The median number of Oscars won by the winningest film of the night over the last 15 years is five—a respectable total, but not one that screams "unstoppable juggernaut." Twelve of the 15 ceremonies saw the winningest film take six Oscars or fewer. Eight of the 15 years were below the average mode of 5.4 Oscars, represented by the black line in the chart below: 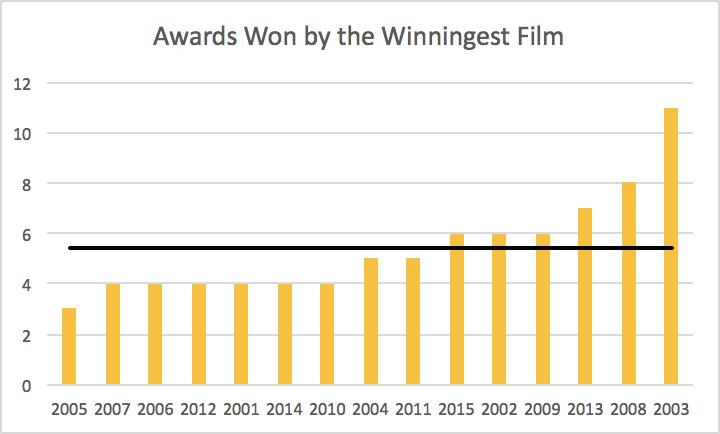 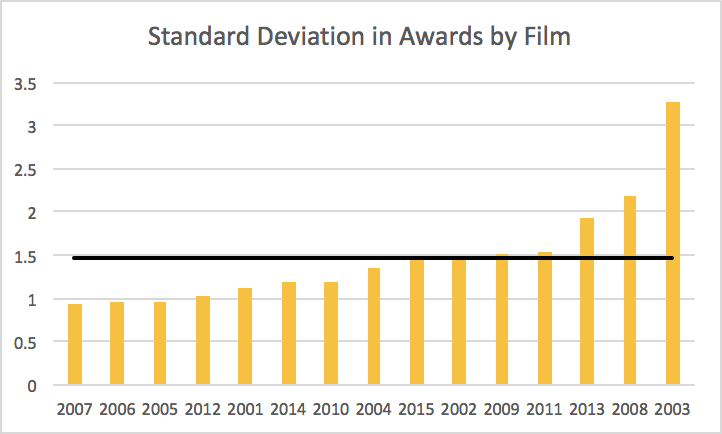 With only three ceremonies in the past 15 years boasting significantly above-average standard deviations, it's clear that a low standard deviation is the norm—which means it's typical for more films to get fewer Oscars. In other words, spreading the wealth.

Of course, the pattern is only true until it isn't. Every so often, a juggernaut of a movie does come along to sweep the Oscars: think Titanic, which went 11 for 14 at the 1997 ceremony. This year appears poised to deliver us another of these rare occurrences. La La Land reaped a record 14 nominations, and according to prediction site Gold Derby, it is favored to win 10 trophies next Sunday. Don't let overarching historical trends override year-specific considerations, like the runaway popularity of Damien Chazelle's musical, when making your Oscar picks.
Posted by Nathaniel Rakich at 10:36 AM