There seems to be some disagreement over the importance of a state treasurer. For instance, during 2015–2016's nine-month budget stalemate in Pennsylvania, the treasurer was the referee—the only one making real-world decisions about how to spend taxpayer dollars as the state's Democratic governor and Republican legislature played politics. But then there is North Dakota—where two of the three candidates running for the office want to eliminate it for redundancy.

Regardless of how important you may think they are, state treasurers serve as the chief financial officers of the massive financial enterprise that is your home state. They influence budgets, turn on and off the spigots of state spending, and manage billions of dollars of investments—often your investments, as a taxpayer and/or pension beneficiary. Sounds like a job for a true professional, right? Well, that or, in 36 states, a common politician.

As they do most constitutional offices, Republican dominate state treasurer offices where they are elected, 22 states to 14. That's largely due to the fact that most treasurers are chosen in midterm elections, which have recently been great years for the GOP. By contrast, the nine treasurers elected at the same time as the president include just two Republicans and seven Democrats. That overexposure puts the Democratic Party at serious risk of losing even more treasurerships in 2016; in fact, as you'll see below, they already have lost one. Whereas both Republican incumbents are running for reelection and are expected to win easily, five of the seven Democrats leave behind open seats.

Below are my race ratings for treasurer; more in-depth explainers can be found after the jump. To check out all the downballot race ratings I've released so far, click on the 2016 Ratings tab. 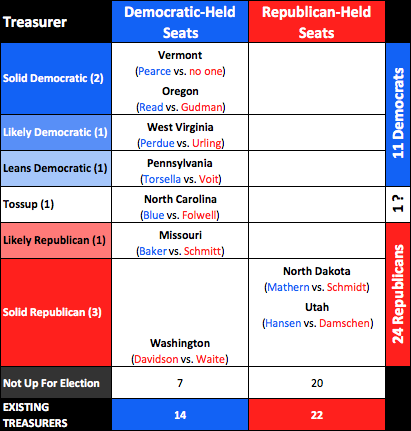 Posted by Nathaniel Rakich at 11:26 AM