Let's say all you want to do on November 8 is go and cast your vote for president. Fine, I respect that. So you go to your polling place and vote, but you find that your local secretary of state has implemented a requirement that only brown-haired people can vote. You and your red curls are disenfranchised. Should you choose to pursue a criminal complaint, your state attorney general is the one who would investigate. And pretend, for the sake of argument, that the conspiracy goes all the way up to the top, and your governor is forced to resign in disgrace. Your lieutenant governor takes over, cleans up the mess, becomes extremely popular, and—coming full circle now—is elected president next cycle as a result.

State constitutional offices are like the minor leagues of politics—where parties develop talent for higher office—but they also fulfill important roles in and of themselves as VIPs in your state capital. Like politics's own prospects guru, I cover these downballot elections closer than most. I maintain this comprehensive chart of which states have which constitutional offices, when they are up for election, and which party currently controls each. And every year, I issue Cook Political Report–esque race ratings for all the constitutional offices on the ballot. Most of these state offices are up in midterm years, but 2016 will still see a healthy number of them elected: 10 attorneys general, nine lieutenant governors (five elected separately from governors), nine treasurers, eight secretaries of state, seven auditors, five state superintendents, five insurance commissioners, two agriculture commissioners, one comptroller, one labor commissioner, and one commissioner of public lands.

This year, I'll be the only poor schmuck on the World Wide Web to handicap them all. My ratings will be published to the new "2016 Ratings" tab in the menu above, and each new set will be accompanied by an explanatory blog post. The ratings are presented in hopefully-easy-to-understand chart form, like the one below. Races are categorized on two axes: its competitiveness rating (rows) and which party currently holds the seat (columns). While columns are binary—a seat is either Democratic-held or Republican-held—rows are a spectrum, going from the most Democratic-favoring race at the top to the most GOP-leaning at the bottom. This allows you to skim down the progressively more competitive races while also seeing, at a glance, which party is playing defense where. Totals in the bottom row and rightmost column give you a summary of the national picture, either currently (bottom row) or projected after the election (rightmost column).

This post announces my debut ratings for 2016: those for lieutenant governor. Of the 50 states, 45 have lieutenant governors. Two are not popularly chosen, however, leaving 43 lieutenant-governor elections. Only nine of them are happening here in 2016, however, and four of those (Indiana, Montana, North Dakota, and Utah) are on a fused ticket with the governor (à la president and vice president). I consider those LG elections as already ranked by other handicappers' gubernatorial ratings, so that leaves five states holding freestanding lieutenant-governor elections in 2016: Delaware, Missouri, North Carolina, Vermont, and Washington.

Three of the five offices are currently held by Republicans, but Democrats have an excellent chance to pick up seats—maybe even go five for five. (It helps that four of the five seats have no incumbent.) However, it's likely to do little to dent Republicans' lieutenant-governor advantage of 30 to 12 (with one formerly Democratic vacancy) overall. 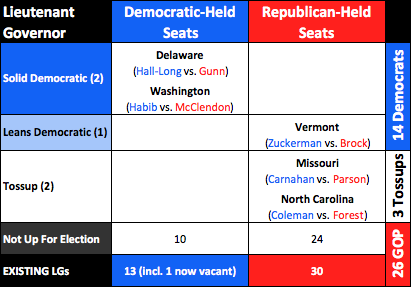 Posted by Nathaniel Rakich at 12:57 PM