Election is Nine-Tenths of the Law: 2016 Attorney General Race Ratings

You know NRCC and DCCC and DSCC and NRSC; DGA and RGA and RSLC and DLCC. But do you recall the least famous party committees of all? The Democratic Attorneys General Association (DAGA) and Republican Attorneys General Association (RAGA) are far less glamorous than their higher-office counterparts, but they still funnel millions of dollars in both hard and soft campaign cash into attorney-general elections every cycle. Their donors? People and corporations savvy to the powerful role of state attorneys general.

As the chief legal authority in each state, attorneys general can decide whom to prosecute, what to sue over, even which laws to enforce. Questions swirled around Florida Attorney General Pam Bondi for choosing not to investigate Trump University after Donald Trump donated to her campaign. Red-state attorneys general have banded together to challenge the Affordable Care Act and federal environmental regulations. In West Virginia, as in many other states, the attorney general sets the tone for drug prosecutions and the state's fight against opioid addiction—which is why it caused controversy when pharmaceutical companies that provide those drugs, and are even the subject of state litigation, donated thousands to Attorney General Patrick Morrisey's re-election campaign.

That's just one of the pieces of intrigue in this year's attorney-general races. Pennsylvania will elect its fifth attorney general in four years after a vendetta against a political enemy brought down a rising Democratic star. Missouri and North Carolina will fill open seats left behind by two alums of their AG's offices—Chris Koster and Roy Cooper—who are good bets to become governor. More so even than lieutenant governor, the job is a firm stepping stone to higher office.

Every state has an attorney general, but only 43 elect them. Among these states, Republicans enjoy a 23–20 advantage in top cops (it's 27–22 overall, with one nonpartisan AG). This year, 10 of the seats are up for election across the country, including six Democratic-held seats and four Republican-held ones. The GOP is poised to add to its numbers slightly, with most of the competitive races on Democratic turf and an RAGA with far more cash to burn than the DAGA. A preponderance of open seats—four out of five of which are currently Democratic—in purple and red states may help to sink progressives.

Below are my race ratings for attorney general; more in-depth explainers can be found after the jump. To check out all the downballot race ratings I've released so far, click on the 2016 Ratings tab. 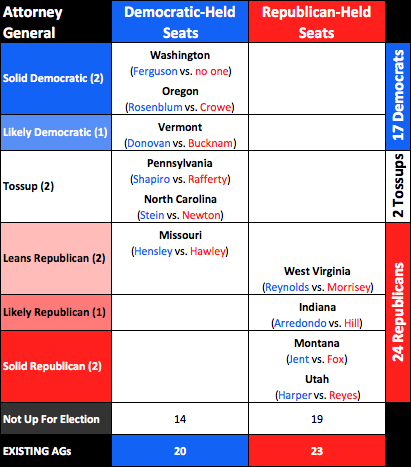 Posted by Nathaniel Rakich at 7:59 PM