How to Rig an Election: 2016 Secretary of State Race Ratings

Donald Trump's claims that the 2016 election will be rigged against him are not only damaging to democracy, but they're completely divorced from reality. Elections are run locally by hundreds of different election authorities totally unconnected at any federal level. At the absolute highest level, elections are overseen in most states by a secretary of state.

The problem for Trump is that Democrats hold just 20 secretary of state offices while Republicans hold 26—including those in important swing states like Iowa, Ohio, and Florida. If these officials wanted to rig the election, most of them would do so to favor the Donald!

But if voters are so concerned about voter fraud and disenfranchisement, they should be more interested in this obscure state office. To a certain extent, secretaries of state do have the power to put a figure on the scale in state elections: choosing early-voting times, cutting the state's voter rolls, and removing the option of straight-ticket voting. So if you did want to rig an election, secretary of state would be a very valuable office to control.

In 35 states, that means winning the job at the ballot box. Currently, 1.5 times as many Republicans have been elected secretary of state as Democrats (21–14). That has the chance to change pretty drastically with the eight secretaries of state up in 2016. Up to six of the offices could conceivably change hands, thanks mostly to a suboptimal distribution of the six Democrats and two Republicans currently in office: four of the Democratic ones serve in red states, and both of the Republican ones are in blue states. This election seems likely to bring a recalibration, with possible Republican pickups in Missouri and Montana and potential Democratic pickups in Washington and New Mexico. And keep your eye on West Virginia, where I think an upset could be brewing.

Below are my race ratings for secretary of state; more in-depth explainers can be found after the jump. To check out all the downballot race ratings I've released so far, click on the 2016 Ratings tab. 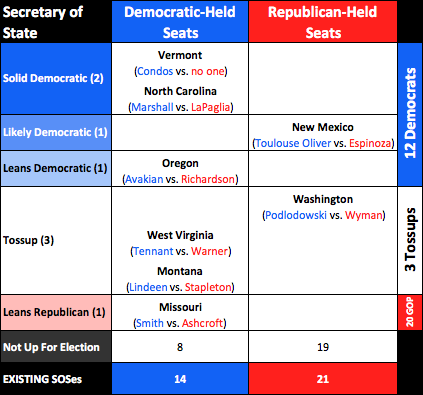 Posted by Nathaniel Rakich at 10:29 AM