Now that Donald Trump is, like we all predicted, the presumptive Republican nominee for president, we can close the book on his impact on the Republican primary. But while he did a great number of remarkable things over the first half of this campaign, wreaking havoc in downballot races wasn't one of them.

This year's primaries saw unprecedented levels of interest: Trump attracted an enthusiastic following who faithfully rushed to the polls for him, while those whom Trump terrified were equally determined to participate and snuff out his campaign. As a result, turnout has increased to near-record levels—nearly doubling up 2012 levels in some states. With so many new voters participating in Republican primaries, the potential was there for a major departure from past results that so often favored uneventful establishment victories. But in the handful of states where the Republican Party held its presidential and congressional/downballot primaries on the same day, there's little evidence that the anti-establishment wave that obviously took hold at the top of the ticket trickled down into other races.

The first question I had was whether all these new presidential-primary voters would even bother voting in downballot races. After all, so many of them seemed laser-focused on the presidency—either getting Trump elected to it or stopping him from ever getting close. But while turnout in downballot primaries certainly was lower than in the presidential primaries, it wasn't that different from the same such gap that always exists.

What's more, there wasn't a lot of consistency from downballot race to downballot race. The table below goes beyond the aforementioned averages and gives you each race's turnout changes; this makes it abundantly clear that the presidential turnout was only a secondary influence on downballot turnout. It turns out that these races stand on their own merits; when they're competitive, turnout goes up.

For example, turnout in TX-15 shot up in 2016 (202.0% of 2012 levels) to the point where more people actually voted in the Republican primary for Congress than in the Republican presidential race in the district (+34.6% more, to be precise); this is because the district is an open-seat race in 2016. Likewise, in IL-11, a competitive GOP primary for a Democratic-held swing district caused turnout to almost double (194.0%) that of 2012, when incumbent Judy Biggert was the unquestioned nominee. This was such a significantly bigger increase than the presidential race that voters in IL-11 were probably motivated primarily by the race for Congress, not the Oval Office!

On the other side of the coin, Republican primary turnout in Indiana's US Senate race rose more modestly (+48.6%) from 2012 levels than did the presidential race (+74.4%), but this is more about reversion to the mean; the 2012 Senate primary in Indiana between Richard Lugar and Richard Mourdock attracted huge interest—even more than the presidential race that year (104.1% of the number of presidential voters cast a ballot for Senate). This year's contest, while an open seat, was more muted.

Here are the numbers for every race: 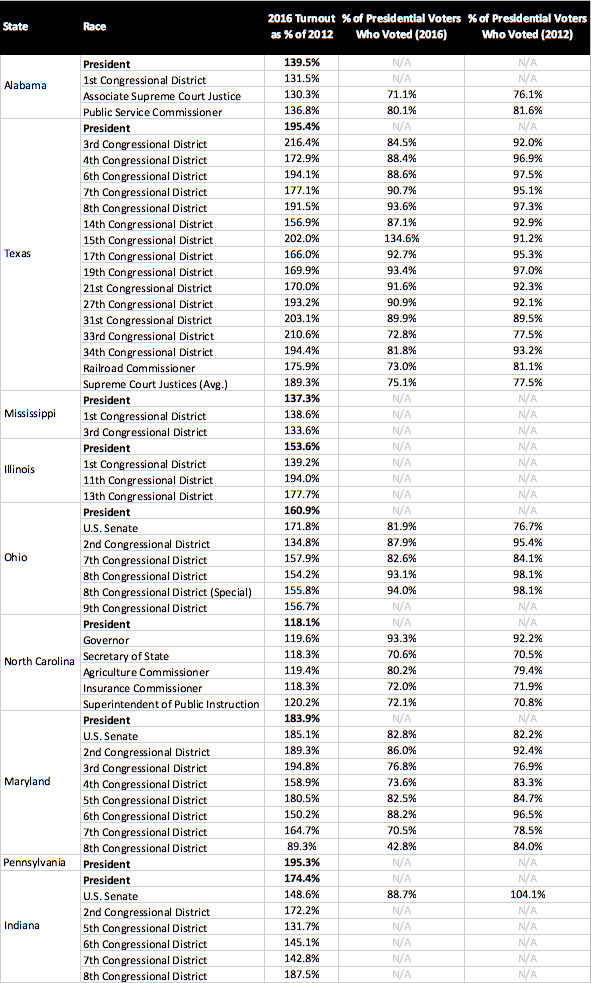 There are even exceptions in non-obvious places. For instance, 2016 turnout in all five contested GOP primaries for constitutional office in North Carolina surpassed 2012 levels by more than presidential turnout did. And, despite a snoozer of a Republican primary in which Senator Rob Portman faced only token opposition, this year's US Senate primary in Ohio saw more interest relative to the presidential race than in 2012. At times, the turnout differences can seem almost random. With such random variation, we can be pretty sure that there wasn't an unusual degree of downballot dropoff in this year's primaries—and we know unambiguously that voter participation in downballot primaries was higher than in 2012. With only one exception, turnout increased over 2012 levels by at least 18% in every race with enough data to analyze. (The exception is the Republican primary for MD-08, which has a simple explanation: the Democratic primary for Chris Van Hollen's old seat was extraordinarily competitive in 2016 and dominated the airwaves for weeks before the election, so unsurprisingly a lot of voters developed stronger opinions about that party's primary and pulled Democratic ballots instead.)

So Trumpites (and anti-Trumpites—whoever this new army of voters includes) are participating in lower-level elections. Are they having any effect? To find out, I took another look at the same elections analyzed above, except this time at the actual results. In those races with an incumbent running for re-election and/or a clear establishment-versus-insurgent tone, I found that the establishment candidate did better in 2016 than 2012 14 times and did worse 17 times. Overall, there is a very frail argument to be made that establishment candidates did fare worse this year, but their average drop—just 1.6 percentage points—is statistically negligible. 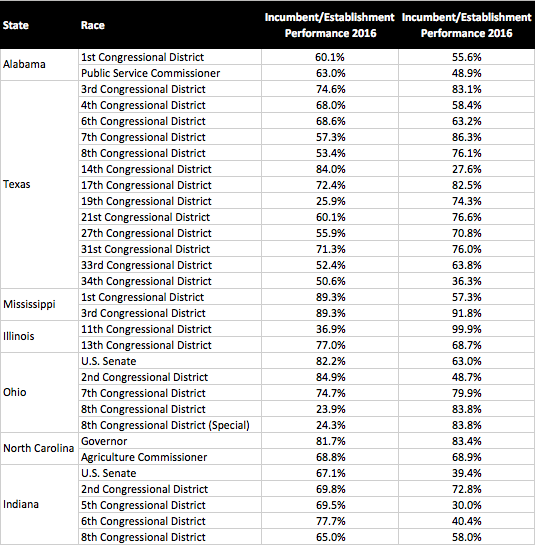 The numbers broken down by individual elections show yet again that the difference is dependent on what race you look at—which suggests that it's not the presidential campaign, but rather intrinsic specificities about each election, that drives results. Some incumbents faced very close calls this year, such as Kevin Brady's bare 53.4% majority in TX-08 or Bill Shuster's 1,227-vote win in PA-09 (not included in the chart because Shuster had no 2012 challenger). But the lack of competitive races surrounding them suggest that the culprit was those candidates' weaknesses rather than a pervasive anti-establishment wave. And some of the biggest swings from 2012 can be attributed to unique circumstances; for instance, TX-19 became an open seat this year, which is always going to lead to a more competitive primary.

Overall, even if their performance dipped a little from 2012, incumbent/establishment types still averaged a healthy 64.5% of the vote in the 31 elections—more than enough for a comfortable victory. So even if the influx of new voters made a difference at the margin, they rarely affected the final outcomes. For example, potentially potent challenges fizzled in both Alabama, where Senator Richard Shelby won 64.9%, and North Carolina, where Senator Richard Burr beat libertarian hero Greg Brannon 61.4% to 25.2%. In fact, no statewide or congressional Republican incumbent has yet lost their primary bid. Most have simply gone unopposed. The bottom line is that, for whatever reason, primary challenges just haven't gained an unusual amount of traction this year.

The one election you could point to where anti-establishment anger prevailed was in OH-08: John Boehner's old seat. In a highly symbolic triumph, businessman Warren Davidson won the primary here with the support of Boehner's old nemeses like the Club for Growth. But the ironic thing for our exercise is that Ohio is the one state where GOP establishment forces prevailed in the presidential primary! John Kasich won the state with 46.8% of the vote, so almost a full majority of the electorate was inclined toward his brand of moderate, reasonable Republicanism. By contrast, in states where Trump won (including Alabama, Mississippi, Illinois, North Carolina, and Indiana), the GOP establishment downballot escaped relatively unscathed.

But, interestingly, the state worst for the establishment overall was Texas, which was carried by Ted Cruz at the presidential level. Cruz isn't Trump—we don't think of him as infusing millions of new voters into the primary process—but he is certainly anti-establishment, having risen to power as a Tea Party hero. And we tend to think of his supporters as savvy, grassroots-oriented conservatives—the kind who organize at local conventions to gain every last delegate edge. Perhaps those supporters are also more likely than Trump's (who are, stereotypically at least, mainly just obsessed with him as an individual figure) to study downballot races and vote for Tea Party candidates there as well. It's an intriguing theory, but unfortunately it is impossible to prove.

In the end, the preponderance of evidence suggests that, while some of 2016's new Republican primary voters are undervoting in downballot races, most are participating. And while perhaps slightly more citizens are voting against establishment candidates, most are still toeing the party line. Overall, other than the greater turnout and interest in this year's elections across the board, downballot Republican primaries appear to be business as usual in this supposed "year of the outsider."

I have a few theories as to why. First, it may suggest that the myth of the type of voter Trump is turning out is overblown. The Donald has claimed to be turning out millions of disaffected people who haven't voted in decades as part of his effort to give a voice to whole swaths of America that have been left behind. But a POLITICO investigation found that Trump's voters aren't that new; rather, they're regular general-election voters who are just participating in primaries for the first time. That suggests a much milder shakeup than Trump himself would predict; after all, incumbents still get re-elected every November at rates around 90%.

Second, even if being part of Trump's new-voter army means you're anti-establishment, it does not necessarily mean you're especially conservative. Much has been made of the fact that Trump and his followers are not actually as far right as, say, Ted Cruz; instead, they are more likely to self-identify as moderate, and many were former Democrats. On the other hand, most downballot insurgent candidates remain conservative Tea Party types—not necessarily Trump-esque populists. Maybe Trump voters aren't shaking up those downballot races because they consider Tea Partiers a different breed. (This goes back to our theory of why insurgent candidates did better in states won by Tea Partier Cruz.) It could be that Donald Trumps just haven't shown up on the congressional level yet. But if this year is an indication, maybe that's what we should look out for in 2018—a new wave of populist primary challengers. If so, maybe that big anti-incumbent wave could still materialize after all.
Posted by Nathaniel Rakich at 11:30 AM 1 comment:

How Far is Baseball from Your State Capital?

I was bored last night and started a little game on Twitter: which MLB teams were closest and farthest from a state capital? Enough people nerded out with me over this that I figured I'd turn it into a blog post. Below are the distances from each MLB team to the nearest state capital, measured as the crow flies from each team's home ballpark to the closest state capitol building using this tool.

Following the trend of state capitals tending not to be states' biggest cities, only four MLB teams are based in state capitals: the Boston Red Sox, the Atlanta Braves, the Colorado Rockies, and the Arizona Diamondbacks. (The Toronto Blue Jays are also based in a provincial capital, while the Washington Nationals are obviously based in the nation's capital.) Of these, the Braves are based the closest to the seat of power, which is less than a mile up Hank Aaron Dr. (which becomes Capitol Ave. in Atlanta). When the Braves move to Cobb County, the Nats will, appropriately, be closest to a capitol building—the U.S. Capitol. If you just want to count state capitals, Coors Field will be closest.

The farthest MLB team from any state capital is the Marlins: 406 miles from Tallahassee. If you are just wondering about the farthest team from its own state government, though, the Padres take the cake—Petco is 472 miles from Sacramento.

Posted by Nathaniel Rakich at 2:21 PM No comments: