Every year around this time I take a brief respite from politics and baseball, where it's slow season, and dip my toe into the deep, deep pool of Oscar-watching. Keep checking this space and my Twitter feed for occasional commentary, including my final predictions right before the Academy Awards ceremony on February 22.

For now, though, just a few observations of interest on the initial state of play. Always of interest to me is which nominees are the most "due" for an award; last year, I wrote about some of the most long-suffering Oscar bridesmaids in history. This year, as I updated my comprehensive list of everyone in history with five or more Oscar nominations, I identified plenty of people who have been to the dance before—many times—but come away empty-handed. The following 2015 nominees are still looking for their first Oscar:


Unfortunately, as I found in my study last year, the idea that the Academy notices when you are "due" and throws you a sympathy Oscar is largely a myth. And lo and behold, none of the above people is favored to win this year; the reality is, except in the acting categories where nominees are truly brand names, voters go for the movie or the body of work, not the person.

Another angle that catches my attention more than you'd think is the politics of the Oscar race. Yes, even (especially?) Hollywood can't rid itself of politics completely. This year, two films have been appropriated by the left and the right and used as weapons in bringing their war to a new theater (no pun intended)—Selma and American Sniper. Selma, one of the best-reviewed films of the year, looked to be an Oscar frontrunner—but that made it an easy target for negative campaigning, as much a staple of Oscar season as of electoral politics. One of the oldest negative campaign tricks in the Oscar playbook is to make an issue of a film's historical accuracy. What had been done before, successfully, to Zero Dark Thirty (that film managed to win just one Oscar, a tie for Best Sound Editing), happened to Selma when various corners accused its director of making President Lyndon B. Johnson out to be a villain. "The movie should be ruled out this Christmas and during the ensuing awards season," Johnson loyalist Joseph A. Califano Jr. wrote in the Washington Post. Despite the movie's liberal alignment, this perceived criticism of a white Democratic president ("white Democrats" basically are Hollywood) stopped the movie's awards campaign in its tracks. When Oscar nominations were announced, Selma received just two: Best Picture and Best Original Song.

A lot of Selma's late momentum instead went to another Christmas release: Clint Eastwood's American Sniper, which appeals to a very different (read: conservative) demographic. Despite mixed reviews, criticisms that it glorified war, and questions about its own historical accuracy, Sniper was nominated for six Oscars, including one that probably came at Selma's expense (Best Actor for Bradley Cooper). The combination of Selma's snubs and Sniper's success on nominations day inspired a new wave of frustration with the Academy's demographics: 94% white, 77% male, a median age of 62. None of the 20 nominees for acting were minorities, and none of the 15 nominees for directing and writing this year were women.

These stats, and the fact that American Sniper is clearly more liked among Academy voters than we previously thought, have caused many to see it as a serious threat to win Best Picture. Sasha Stone, the prominent Oscarologist behind the blog Awards Daily, is a noted preponderant of this theory. But in my opinion, Stone (a vocal critic of the Oscars' white- and male-centric tendencies) is letting her cynicism cloud her predictions. As we sit here on January 20, Sniper is at the peak of its power—coming off the high of six Oscar nominations and a box-office-busting $108.7 million opening weekend. Sniper benefited in the nominations stage from flying under the radar and thus not attracting a loud negative campaign, but now that it has asserted strength in the race it appears that the backlash is beginning. "A week is a long time in politics," the saying goes, and it's no different in an Oscar campaign. There are three of those weeks left until Oscar voters even start voting, and five weeks until the awards ceremony. I'll be surprised if Sniper still looks this strong after taking Selma-level criticism and, probably more importantly, seeing other films take their turns in the sun as films like Boyhood (my Best Picture pick) win important precursor awards like the Producer Guild Awards.

It's also mathematically very difficult for a film as polarizing as American Sniper to win Best Picture. For their top award, the Oscars use instant-runoff voting, which allows voters to rank their preferences; if a voter's top choice is eliminated, their vote gets redistributed down to their second or third choice. This rewards films that are broadly liked, which I doubt American Sniper is; as Grantland's Mark Harris pointed out, the film's association with conservative values (a narrative that has been everywhere this weekend) probably won't do it any favors. For every Jacksonian voter who ranks American Sniper first on their ballot, there is almost certainly a Democrat who will rank it last. At the end of the day, I predict Sniper will win the two awards usually won by war/action movies: Best Sound Editing and Best Sound Mixing. The result will be what everyone might have expected six months ago, and when we look back at this Oscar season, it will seem like an unremarkable achievement, hardly driven by a hidden conservative agenda.

However, that doesn't mean we should go on ignoring Hollywood's diversity issue. I'll bring it full circle here with a shared suggestion for both the Academy and the Baseball Writers' Association of America (BBWAA), the slow-to-evolve body that elects players to the Baseball Hall of Fame. Both the Academy and BBWAA are showing why lifetime membership and lifetime voting rights may not be the best idea anymore in a rapidly changing world. In the film industry (as in every industry), demographics are changing and bringing more women and minorities into prominent roles, yet the older generation of filmmakers are still voting strong in retirement. In the BBWAA, retired baseball writers still vote for the Hall of Fame without even considering new approaches, like sabermetrics, that have fundamentally changed how we assess baseball in the 21st century. Both organizations are also too slow to accept new members and give them a vote in their high-profile elections. If either organization would like to get with the times and avoid all this bad press—and they should—it's time to make their voting pool reflective of the new age we live in.
Posted by Nathaniel Rakich at 9:49 AM No comments: 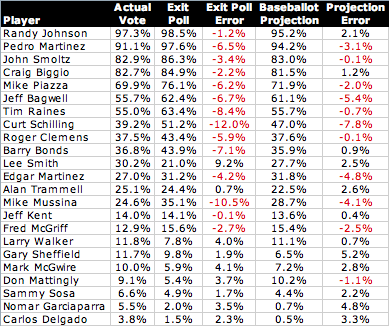 Posted by Nathaniel Rakich at 9:42 AM No comments:

State of the State Schedule 2015

For fans of political oratory, it's a very happy new year indeed. We're coming off an election year when 36 governors were either elected or re-elected, and new legislatures will sit in most states. It's a clean slate for a lot of these pols, and they're gearing up to unveil their agendas in speeches to kick off the 2015 legislative sessions. From redistricting to labor issues to taxes to human rights, the policies that really affect you get made in your state capitol, not Congress—especially in this era of gridlock. Every year, I urge everyone to watch or read the State of the State address—and, this year, inaugural speech—for your state to bone up on what conservative or liberal dream policy is (or isn't) coming down the pike. Here's Baseballot's annual list of speeches to catch this winter (updated as new speeches are given or announced):

National: January 20 at 9pm ET
Posted by Nathaniel Rakich at 10:07 AM No comments: