Previewing Florida SD-40: Three Questions That Will Tell Us the Most About 2018

There's a special legislative election almost every week, but today we have a special special. Ever since Florida State Senator Frank Artiles called a fellow state senator a "fucking asshole" and a "bitch," called the Senate President a "pussy" who was only elected with the help of "six niggas," hired a Hooters calendar girl and a Playboy model as "campaign consultants," and resigned from office in disgrace, the race to replace him has been circled on my calendar—not for any reason related to the Florida-man antics on display from its former occupant, but rather due to the district itself. 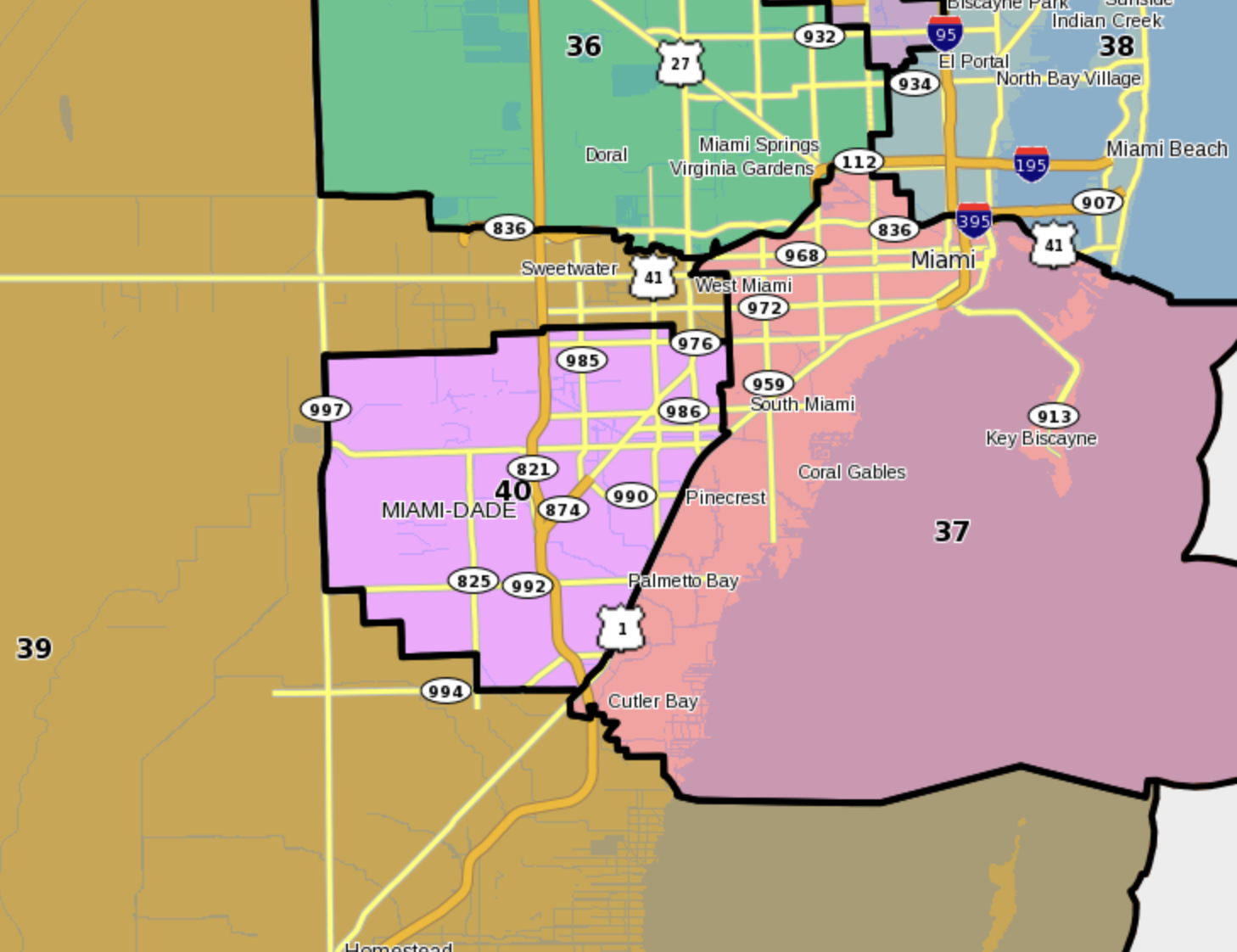 Florida Senate District 40 covers Kendall and other dense suburbs southwest of Miami, stretching from South Dixie Highway (U.S. 1) near Dadeland Mall in the east to Krome Avenue in the west. According to Florida data consultant Matthew Isbell, it voted 57.1% for Hillary Clinton and 39.5% for Donald Trump in 2016 yet preferred Republican Marco Rubio to Democrat Patrick Murphy in that year's U.S. Senate race, 50% to 47%. At the same time, Artiles, a Republican, defeated Democrat Dwight Bullard 50.6% to 40.7% for what was (like it is today) an open State Senate seat.

Why the wide variation in results? A plurality of Florida SD-40's voters belong to the difficult-to-pin-down community of Cuban Americans. This historically Republican bloc has edged into competitiveness as young Cuban Americans (who are more liberal) come of age, the national parties have become more racially polarized, and/or President Trump has alienated the Hispanic community writ large. That explains why SD-40 largely rejected Trump in the 2016 presidential election while still supporting Rubio and Artiles (who are both Cuban American themselves). According to Isbell, an estimated 38% of the district's population is Cuban American. Overall, as of the 2010 Census (and, fair warning, South Florida is a rapidly changing area), the district was 74.6% Hispanic, 14.5% non-Hispanic white, and 8.0% non-Hispanic black. 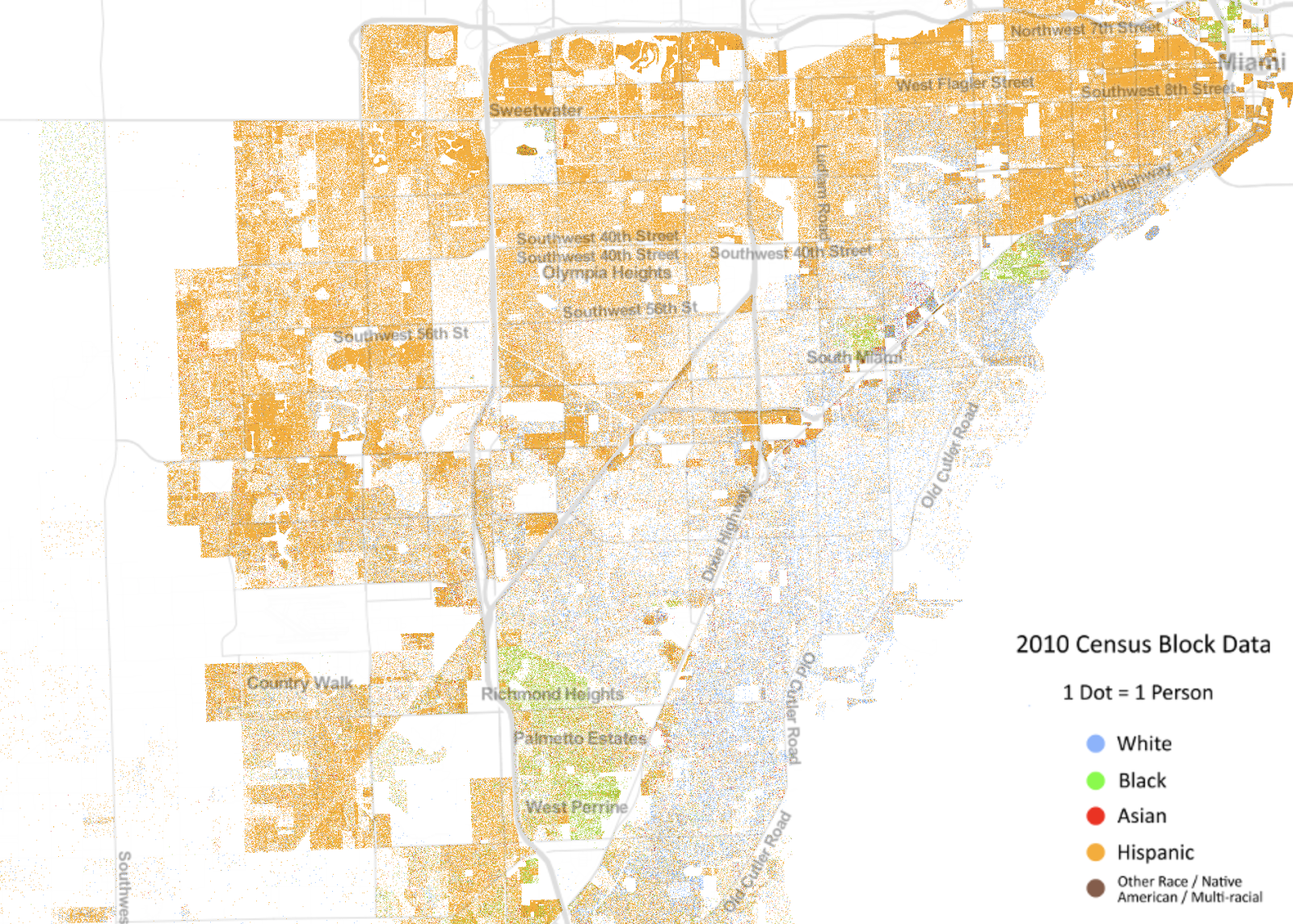 Today, Democrat Annette Taddeo (who is half Italian American, half Colombian American) faces off against Republican José Felix Díaz (who is Cuban American). It's been an expensive campaign (political committees have spent $4.1 million on the race on top of the $1.8 million spent by the campaigns), and the outcome is legitimately in question (the only poll of the race, a three-month-old Democratic internal, gave Taddeo a 42–38% lead). The final results, which will trickle in starting at 7pm ET tonight, will be a particularly useful data point in our never-ending quest to figure out what's going to happen in 2018. There are three crucial questions that we need answered in order to understand how and whether Democrats can take back a U.S. House majority in next year's midterms, and, more than most special elections this year, Florida SD-40 will hold a clue to each of them.

1. Will the election be nationalized, or will voters consider it locally?

This is pretty simple. Unlike more uniform legislative and congressional districts, Republicans have recently done much better here downballot than at the top of the ticket. If voters cast their ballots based on their feelings toward Donald Trump and what is happening in Washington, it's good for Democrats. If they consider the two candidates in a vacuum, it's good for Republicans. Knowing this, Taddeo has tried to tie Díaz (who is a former contestant on The Apprentice!) to Trump with a contrastive TV ad, while Díaz has attempted to play up Taddeo's weaknesses, such as her support for the Colombian peace accord with the FARC and her alleged tolerance of the communist regimes in Cuba and China.

The final result will tell us which candidate was successful. If Taddeo approaches or even exceeds Clinton's 57% here, it could be a sign that this election was decided along national battle lines. That could bode well for Democrats in 2018 if everyone goes to the polls with the unpopular Trump in mind, not their local congressman. If Díaz wins, it's pretty solid evidence that local considerations can still win out in the age of Trump.

2. Will the electorate be more Democratic than usual?

The conventional wisdom about midterm elections is that the electorate is older, whiter, and more Republican than in presidential elections. But most of that conventional wisdom is rooted in the Obama midterms of 2010 and 2014, and the longer-term trend is that the president's party tends to suffer in midterm elections. Indeed, an enthusiasm gap in favor of the Democrats has been apparent lately in measures from the generic ballot to demonstrations. Democratic overperformance has also been a crystal-clear pattern in special-election results so far in 2017, but it'll be important to see whether it holds in SD-40 in particular. Because SD-40 is so heavily Hispanic, there is greater danger than usual of midterm dropoff voting harming Democratic chances. If Taddeo tonight follows in the footsteps of other Democratic special-election candidates across the nation and exceeds the typical Democratic performance in her district, it's a good sign for the party that the typical demographic forces of midterm elections can be overcome. If Díaz does better than expected, it'll suggest that Democrats still have a turnout problem among minority voters. (Note: the best basis for comparison here is not the district's presidential lean, for reasons explained above; instead, keep an eye on how Taddeo and Díaz perform relative to Bullard and Artiles in the last open State Senate race in this district just ten and a half months ago.)

3. Was 2016 a political realignment, or will election results revert to their pre-2016 norms?

Most special elections this year have taken place in districts that shifted toward Republicans in 2016 with Trump on the ticket—enough that we can be pretty sure that "Trump Democrats" aren't lost to Democrats forever. But we know a lot less about the opposite case: historically Republican Clinton voters. Will Democrats be able to hold onto them in future elections? Many of their best paths to a U.S. House majority go through districts, including several in heavily Hispanic California and Florida, that shifted toward Democrats in 2016.

Florida SD-40 is one of those districts. According to Isbell, voters within its lines went for Barack Obama over Mitt Romney 54.5% to 44.9% in 2012. In a scenario where Democrats succeed in nationalizing this special election, a smaller Taddeo win might suggest that voters are sticking with their 2012 preferences; a Taddeo blowout might suggest that the 2016 baseline is more accurate. However, because of this district's unusual ticket-splitting tendencies, it may not be easy (or appropriate) to directly compare the 2017 State Senate results with the 2016 and 2012 presidential results, as explained above. So while the district's (new or old, 2016 or 2012) partisan baseline will certainly factor into tonight's results, it will probably be the trickiest thing to tease out. Simply put, the race is expected to be far closer than either Obama's 9.6-point win or Clinton's 17.6-point win, so a nail-biter wouldn't necessarily mean that the more Republican-favorable (i.e., 2012) baseline is the correct one.

Indeed, all three of these factors are going to affect the final verdict in Florida SD-40 tonight—and yet we're only going to see one set of topline results. Admittedly, that may make it difficult to tease apart exactly what to take away from the election; for instance, the variables listed above could pull in multiple directions, muddling the analysis and leaving the door open to more than one explanation. There's another major confounder: the cleanup after Hurricane Irma. Many areas of the district, which was hit hard earlier this month, are still without power, and voting may simply not be many people's top priority. (Governor Rick Scott rejected the Democratic Party's request to postpone the election until life in South Florida returned to normal.)

So even though the answers to all three questions will lie hidden in tonight's two simple results—Taddeo X, Díaz Y—they may not be obvious. But the election will still be able to tell us something. Certain results could eliminate certain 2018 theories, and a select few results would offer unambiguous lessons. If Taddeo wins by 17 points or better (i.e., she does better than Clinton), all three questions will have been answered in Democrats' favor. If Díaz outperforms Artiles's 10-point win from 2016, Republicans will be dancing a jig of glee.

If you're looking for a more definitive lesson to take away from tonight's results, though, you're in luck. If nothing else, this election is likely to foreshadow the open race for Florida's 27th Congressional District, which is being vacated by Republican Ileana Ros-Lehtinen in 2018. Both FL-27 and SD-40 voted similarly in the 2016 and 2012 presidential races (both moving toward Democrats), both are three-quarters Hispanic, and both are open seats. In fact, they share many of the exact same voters: 24.1% of voters in FL-27 live in SD-40, and 34.7% of voters in SD-40 live in FL-27. Whichever party prevails tonight has to be considered the favorite in FL-27 next November—and that's one-twenty-fourth of Democrats' way to a majority.
Posted by Nathaniel Rakich at 7:34 AM No comments: