If baseball is oxygen (and we all know it is), we can breathe again. As I type this, there are 320 hours left until Opening Day (Down Under edition), when the unpredictable weighted random number generator that is the 2014 season will commence. I, like so many others, will be taking a stab at predicting this summer's outcomes on the diamond, but first I think it's instructive to be reminded how much those predictions are really worth.

Prediction: The Tigers would go 93–69 and join the 92–70 Blue Jays in the playoffs. Meanwhile, the Indians would stink up the cellar to the tune of 70 wins and 92 losses.
What Really Happened: The Tigers went exactly 93–69... But the Blue Jays stumbled their way to last place. As for the Indians, they won as many games as I said they'd lose. Cleveland was my biggest miss; the 22-win difference thankfully didn't compare to my terrible predictions for Baltimore and Oakland in 2012. I missed another seven teams by more than 10 wins, but on the bright side I got 15 teams—including the Tigers—within five wins. The full report card: 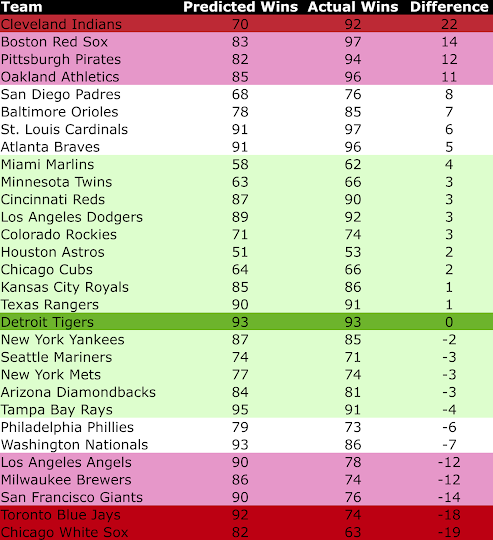 Prediction: "Clay Buchholz will see his ERA drop by a full run...Koji Uehara will end the season as closer; Mike Napoli will make Boston wish they had locked him up long-term...[and] John Lackey will pitch 150 innings"—but none of it would help the Red Sox get any better than .500.
What Really Happened: All of that came true, and it led to the first World Series clinch at Fenway Park since 1918, which, in retrospect, seems obvious. Buchholz lowered his ERA by not just a run, but 2.82 runs (!), while Lackey pitched 189.1 innings.

Prediction: Amid another subpar season from Starlin Castro, talk would begin about trading him. The Cubs would only be worsted by the Marlins for offensive futility.
What Really Happened: Castro (.245/.284/.347) had the worst season of his career, and immediately after the season sources indicated the Cubs were shopping him. The Cubs scored a paltry 602 runs, which would've been lowest in the NL were it not for the presence of the Marlins (513 runs).

Prediction: Raúl Ibañez and Nate McLouth would have miserable years and retire during the current offseason.
What Really Happened: McLouth registered a 2.5 fWAR and signed a two-year, $10.75 million contract with the Nationals—the first multiyear deal of his career. Ibañez hit 29 home runs, tying Ted Williams's record for most ever by a 41-year-old.

Prediction: The Pirates would break their streak of 20 consecutive losing seasons, but only barely. Francisco Liriano would do everything in his power to sink that goal, however, with another spectacularly bad year.
What Really Happened: Liriano won Comeback Player of the Year honors, and the Pirates broke their streak as early as September 3. They went on to make the NLDS.

Prediction: Shelby Miller would start 2013 as the Cardinals' fifth starter, barely winning the job in spring training; he would end it as the co-ace with Adam Wainwright. Joe Kelly would shine as an injury replacement for Jaime García.
What Really Happened: Miller won that spring battle and never looked back; his 3.06 ERA almost bested Wainwright's 2.94, which was tops among the Cardinals' full-time starters. Kelly's 2.69 was the lowest among part-time starters.

Prediction: Mike Trout, Josh Hamilton, and Albert Pujols would be three of the most five valuable players in MLB. Meanwhile, Tommy Hanson, Jason Vargas, and Joe Blanton would be three of the worst starters in MLB, all with ERAs over 4.00.
What Really Happened: Just call me Jerry Dipoto, because I way overestimated Hamilton and Pujols. While Trout ranked first in MLB with 160 Total Runs (per the Fielding Bible), Hamilton registered at barely half that (85). Pujols (53) didn't even crack the top 300, as he didn't play after July 26. At least I was right—often dramatically so—about the suckage of the Angels rotation.

Prediction: The Braves would exactly match their 700-run output from 2012; down a Michael Bourn, Dan Uggla would step up to replace that production. BJ Upton would be a huge flop.
What Really Happened: I was close—the Braves scored 688. That was even higher than Upton's OPS, though (.557). Uggla, however, was dead weight too, hitting .179/.309/.362.

Prediction: Leading the Giants back to the division crown, Tim Lincecum, Matt Cain, Madison Bumgarner, and Ryan Vogelsong would all sport ERAs below 3.30.
What Really Happened: Bumgarner lived up to the promise and then some (2.77 ERA), but Lincecum, Cain, and Vogelsong were all actively bad. The Giants lost 86 games.

Prediction: Matt Harvey and Zack Wheeler would stabilize the Mets' rotation, striking out more than a batter an inning and finishing with ERAs below 3.75.
What Really Happened: Harvey exceeded even my expectations with a 2.27 ERA. He gave up just 0.4 home runs per nine, 1.6 walks per nine, and, yes, 9.6 strikeouts per nine. Wheeler missed the high strikeout prediction (84 K in 100 innings), but he did have just a 3.42 ERA.

Prediction: St. Louis would score the most runs in the National League and also rank in the top five for defense. Five position players would feature WARs above 4.0.
What Really Happened: St. Louis did lead the NL in scoring, by a huge margin, but the Fielding Bible pegged them as the second-worst defensive team in the NL; they saved –39 runs. Three position players had fWARs over 4.0—Matt Carpenter, Yadier Molina, and Matt Holliday—which, you know, still isn't bad.

Prediction: Three Padres—Carlos Quentin, Chase Headley, and Yonder Alonso—would hit 15 bombs.
What Really Happened: Only two did. Their names were Jedd Gyorko and Will Venable, who both hit over 20. Quentin, Headley, and Alonso combined for just 32.

Prediction: The Royals would click on all cylinders. Eric Hosmer, Mike Moustakas, and Salvador Pérez would combine for 80 home runs, and Wade Davis would be dominating in the starting rotation. The Royals' bullpen would be the best in the American League.
What Really Happened: The trio of sluggers barely hit half my prediction—42 home runs—while batters hit .307/.374/.447 off Davis. The bullpen was as good as advertised, though—better not only than every American League bullpen in 2013, but every American League bullpen since 1990.

Prediction: The Dodgers' rotation wouldn't be everything it was cracked up to be. Zack Greinke would manage only a 3.50 ERA, and Hyun-Jin Ryu would struggle with conditioning. At least Chad Billingsley would be reliable.
What Really Happened: Billingsley had a 3.00 ERA—in two starts. Greinke, meanwhile, twirled a 2.63 ERA, and Ryu neatly started 30 games with a 3.00 ERA.

Prediction: Brett Anderson would challenge for the AL Cy Young Award, leading the Athletics to a better ERA—but worse ERA+—than the Rangers.
What Really Happened: Due to their drastically different ballparks, the Rangers did register a 114 team ERA+ with a 3.63 team ERA, and the Athletics had just a 105 ERA+ with a 3.56 team ERA. Anderson, though, struggled through injury to a 6.04 ERA. He's now a Colorado Rockie.

Prediction: The Nationals would underperform their 2012 offensive output of 731 runs thanks to regressions by Jayson Werth, Adam LaRoche (who would hit just 20 home runs), and Ian Desmond.
What Really Happened: The Nats indeed scored only 656 runs; part of the problem was indeed LaRoche hitting exactly 20 home runs (along with .237). However, Desmond established himself as one of the NL's best shortstops, and Werth hit for an unlikely .931 OPS.

Prediction: Only Joey Votto, Shin-Soo Choo, Brandon Phillips, and Jay Bruce would have above-average OPSes for the Reds. The team would also contend with injury; their top five pitchers would not again combine for 161 starts.
What Really Happened: Only Votto, Choo, and Bruce had an OPS+ over 100; Phillips was even worse than he was in 2012. And I was right about the 161 starts—that would have been impossible. The Reds' top five guys started "only" 145 of their 162 games.

Prediction: Ryan Howard would return to form whereas Roy Halladay would not. Ben Revere would hit his first major-league home run—finally!—while Domonic Brown would hit a lot more than that, finally breaking out the talent everyone knew was there.
What Really Happened: Howard's 11 home runs were the lowest since his first big-league season in 2004. Revere, meanwhile, is still homerless—he had only 336 chances in 2013 thanks to injury, though. Brown must have been motivated by my faith, since he put up huge numbers (27 home runs and 83 RBI) in a career-high 496 at-bats. And I've never been sadder to be right about Halladay, whose last season in the majors was an embarrassing one (6.82 ERA).

Prediction: Reversion to the mean by Ángel Pagán, Marco Scutaro, Buster Posey, and Pablo Sandoval would leave the Giants with the NL West's fourth-best offense.
What Really Happened: Their 629 runs scored was indeed the division's second-worst total. However, Scutaro had a 112 OPS+, Pagán a 116 OPS+, Sandoval a 119 OPS+, and Posey a wicked 138 OPS+.

Prediction: There was no way Scott Kazmir would last the full season in the Indians' rotation, despite the return to hittability by Ubaldo Jiménez and Justin Masterson. However, the Cleveland offense would compensate somewhat, finishing in the AL's top four for OBP.
What Really Happened: Defying the odds, Kazmir stuck in the rotation all year for the first time since 2010. Jiménez and Masterson pitched well enough to not only get the Indians to the Wild Card (my biggest win-loss miss), but also earn themselves a lucrative multiyear contract (Jiménez; four years, $50 million) or get engaged in serious extension talks (Masterson). As for OBP, I missed again—but by only one! The Indians finished fifth in the AL.

Prediction: Mariano Rivera would win Comeback Player of the Year.
What Really Happened: Was there ever really any doubt?

Posted by Nathaniel Rakich at 8:07 AM