Depending on Springfield's system of government, before Gary Chalmers could become superintendent, he might have had to be elected to it. On the state level, superintendents of public instruction are placed in charge of our most precious resource: sloppy joes. Oh, and children, I guess. State superintendents are responsible for the day-to-day management of the entire state school system—often a billion-dollar enterprise—and make highly sensitive policy decisions on things like curriculum that hit close to home for many families. Superintendent elections have been some of the most contentious and downright unbelievable campaigns of the past few cycles, and yet they still get a disproportionately low amount of voters' attention. They are the battlefield where the controversy over Common Core plays out; they become bloated with campaign cash from special interests just looking for one inch of progress in the long-running trench warfare over charter schools. In Indiana, the superintendent's office has been a tense place to work in the last four years, as its occupant and Governor Mike Pence played tug-of-war with the fate of Hoosier education. In this year's election, control over North Dakota schools will go either to a candidate who had complimentary words for Adolf Hitler or an incumbent who has had multiple brushes with the law.

Superintendents of public instruction are elected in 13 states. Six of the elected superintendents are Republicans, and three are Democrats; four are nonpartisan, because apparently more states think it's important that education not be a political issue than who runs our elections, but we'll leave that aside for now. In a remarkable display of the presidential vs. midterm divide, all three Democrats were elected in 2012 and are up again this year; all six Republicans were elected in 2014, so none are on the ballot in 2016. Two of the nonpartisan offices are up in 2016 as well. With most of this year's races competitive, it's entirely possible that Democrats will exit 2016 with control of no state superintendent offices in the entire country. With the election only days away, we'll know the results sooner than you can say, "SKIIIIIIIIIIIIINNNNNNNERRRRRRRRRR!"

Below are my race ratings for superintendent of public instruction; more in-depth explainers can be found after the jump. To check out all the downballot race ratings I've released so far, click on the 2016 Ratings tab. 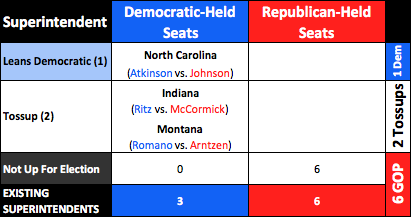 Posted by Nathaniel Rakich at 1:38 PM