Thanks to a Constitutional Quirk, Nothing to See in New Hampshire or Vermont in 2018

New Hampshire Governor Chris Sununu and Vermont Governor Phil Scott just took office seven months ago, and yet they are already having to run for reelection. New Hampshire and Vermont are unique among the states in that they elect their governors to two-year, rather than four-year, terms—resulting in nearly never-ending gubernatorial campaigns.

Democrats eager to start rebuilding their gubernatorial bench in 2018 are practically salivating over these two northern New England states. They doubtlessly look out on the Granite State’s political landscape and see a state that’s among the swingiest in the nation—one Donald Trump lost by just 2,736 votes in 2016—entering what could be a dramatic Democratic wave election. Meanwhile, in the Green Mountain State, a Republican sits on the throne of one of the most liberal states in the union—the home state of Bernie Sanders that went for Hillary Clinton by 26 points. You can understand why Democrats think they have an opening.

Unfortunately for them, their thinking is flawed; both Sununu and Scott are heavy favorites in 2018 due to the same underlying campaign context that Democrats think will help them. While New Hampshire and Vermont voters can be quite independent, that doesn’t mean they’re impatient enough to give up on their governors after just two short years. Indeed, these states’ unusual election calendars raise a very simple question: how often do governors lose reelection after only two years in office?

In addition to New Hampshire and Vermont, Rhode Island also elected governors to two-year terms until it amended its constitution effective 1994. Out of the collective past 85 biennial gubernatorial elections in those three states, an incumbent governor running for reelection after his or her first term has lost just one. It hasn’t happened in Vermont since 1962; it didn’t happen in Rhode Island after 1962; and it has happened just once (2004) in New Hampshire in the past 90 years. Indeed, running for governor against a two-year incumbent could be considered insane by one famous definition—doing the same thing over and over again and expecting a different result.

This is a significant difference in job security from governors elected quadrennially. As we’ve all observed, one-term governors are hardly unusual in the other 47 and a half states. It also becomes a lot more likely that Vermont, sometime Rhode Island, and especially New Hampshire governors lose reelection or retire once they serve four years: 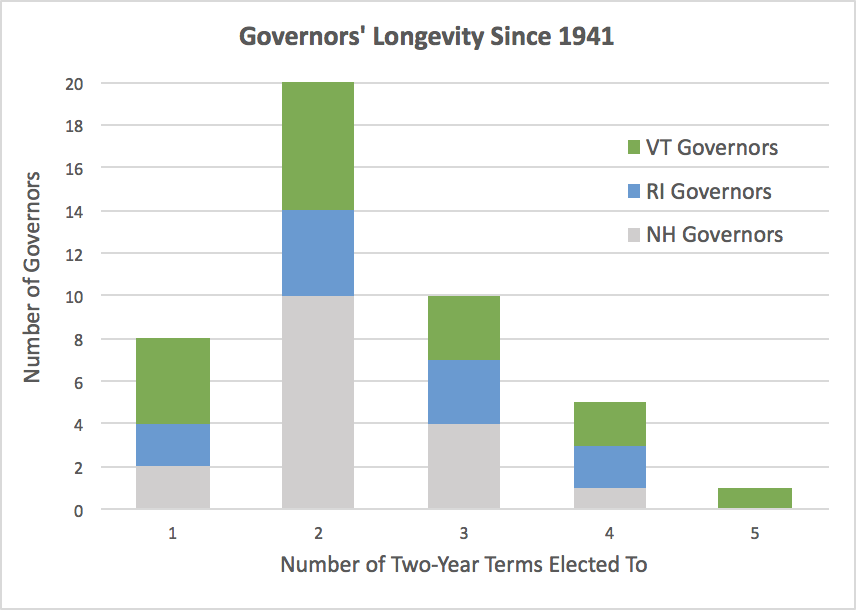 What accounts for this near-invincibility? Most likely, it’s an extended honeymoon period. When any politician enters office, he or she generally enjoys increased popularity and political capital. Most of them are able to convert this political capital into action and results, which in turn lifts their popularity even higher. It’s not until a few years down the line that voters begin to get sick of their governor and/or the candidate falters.

This theory arises from the fact that, not only do two-year governors almost always win their first reelection battles, but they almost always do so even more convincingly than they won the corner office in the first place. Historical results for New Hampshire, Vermont, and Rhode Island gubernatorial elections going back to 1972 point to the electoral potency of a two-year incumbency: 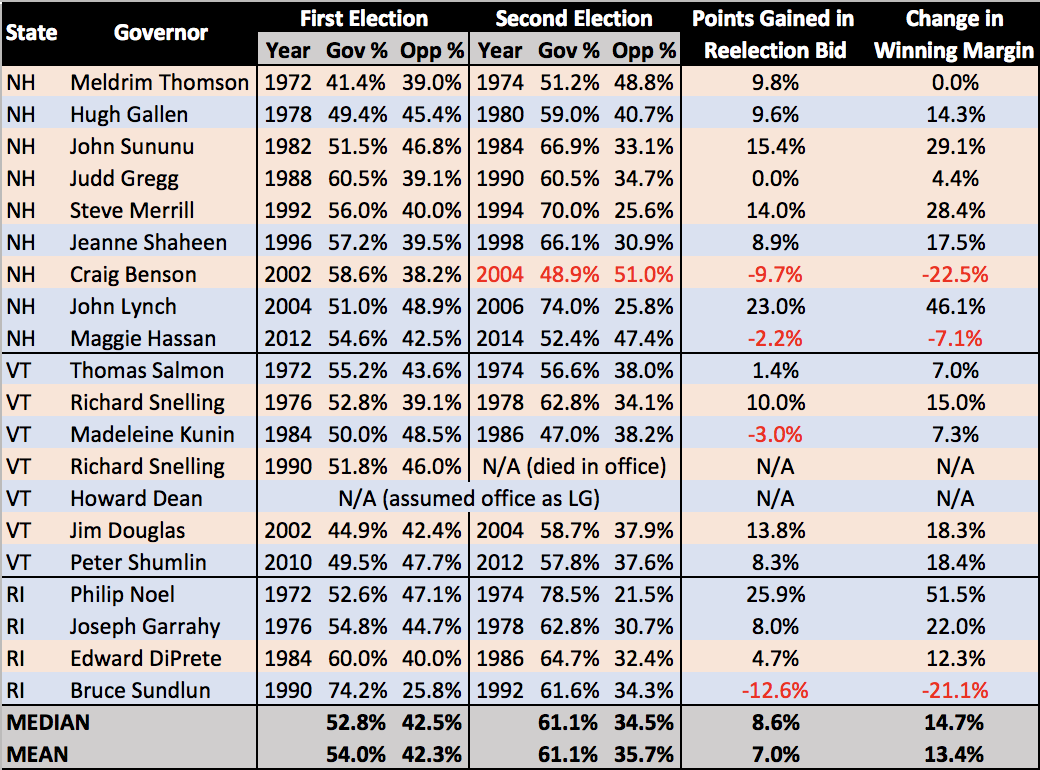 That’s an average boost of 7.0 percentage points to the incumbent’s vote share and an average 13.4-point widening of his or her margin of victory. That’s conservative, too; Bruce Sundlun drags down the data because he did so well in his first election that his reelection (which he won comfortably) couldn’t possibly match it. In addition, Madeleine Kunin’s vote share fell in her reelection bid even though her margin of victory increased; that was because she faced a credible third-party challenger (Sanders, of all people) in 1986 as well.

Craig Benson in 2004—the one two-year governor during this period to lose reelection—remains the only truly concerning precedent for Sununu and Scott. Indeed, he is a poster child for what not to do in your first two-year term as governor: flout ethics rules, overreach legislatively, and make enemies. However, Sununu and Scott have avoided any such missteps, and their net approval ratings are sky high. They look well ensconced in their aforementioned honeymoon periods, and they are well on the path of every non-Benson two-year governor since 1972 to comfortable reelections. If historical averages hold, Sununu can expect to receive about 56% of the vote in 2018 to his opponent’s 40%; Scott can expect to prevail 60% to 38%.

But there’s also a warning hidden in the data. Two of the three governors whose margins of victory shrank in their reelection campaigns have served within the last 15 years; the recentness of Benson’s example is certainly a red flag. Could we be entering a period of more impatience in the electorate? Are the 21st century’s heightened partisanship and increased correlation between national and state election results finally overpowering these states’ longstanding traditions of voting for the person over the party? It’s impossible to tell as of yet, but it’s something for Sununu and Scott to be mindful of. By no means can they afford to sit back and take reelection for granted. But with prepared and competent incumbents, Republicans at least have history on their side.
Posted by Nathaniel Rakich at 10:06 AM