It's the most ludicrous time of the year—Hall of Fame voting! Every year around this time, we gather around our computer screens with our loved ones [in another room] to rehash the same tired old debate between the new and old schools of baseball thought. I don't pretend to bring any new wisdom to that crusade, but as my contribution instead I want to illuminate some patterns about how the contentious elections have worked in the past. Rather than saying who should make it into the Hall—I'm interested in trying to predict who will.

Last year, I took a look at Hall of Fame "exit polls" and, like Nate Silver's famous political model, attempted to project the 2013 vote totals. I'll be doing that again this year, but right now there aren't enough exit-poll data to run that analysis. Instead, what I'd like to do for now is look at the likeliest resolution for one of the Hall of Fame's most polarizing nominees: Jack Morris.

Jack Morris, as you probably know, is a favorite of the old-school crowd. They love his 254 wins, supposed ability to "pitch to the score," and of course his performance in Game 7 of the 1991 World Series. Despite the opposition of the numbers crowd (numbers like Morris's career 3.90 ERA, higher than any Hall of Famer's), Morris is now on the cusp of induction—but time is running out. This will be Morris's 15th year on the Hall of Fame ballot, and per the rules, he will be eliminated from contention if he can't make it in this year. So our question is a simple one: will he make it?

Morris's proportion of the vote has been in steady incline since he debuted on the ballot in 2000. That year, he garnered just 22.2% of the vote (imagine that today—not too long ago most people actually agreed Jack Morris was not a Hall of Famer) and has increased to 67.7% since. That's an average annual increase of 3.5 percentage points, although there has been a lot of variation in that (he's gained as much as 13.2 points in a year and lost as many as 4.1.) A simple polynomial regression fits the data fairly well: 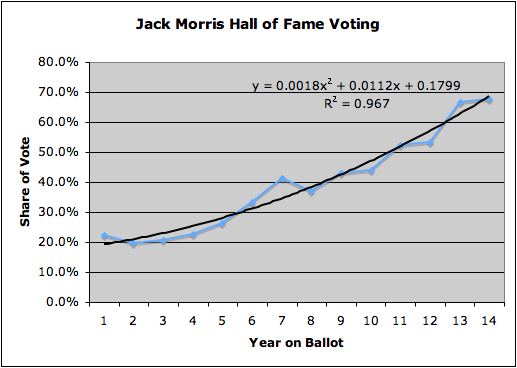 According to this formula, Morris will receive 75.3% of the vote this year—just enough for induction, although really that indicates that this race is a tossup.

Breaking the tie could be that, by rule, a player's 15th year on the ballot is his last. Jack Morris will not have another chance to make the Hall of Fame after 2014 (at least by conventional means). According to conventional wisdom, this will cause voters to give him extra consideration—and thus he will experience a larger-than-usual increase in his vote totals. This is referred to as the "15-year bump."

Unfortunately for Morris, though, the 15-year bump is a myth. Since 1967, when the modern Hall of Fame voting system went into effect, 35 players have made it to a 15th year on the ballot. They had a median boost of just 2.6 percentage points in their final year; several players, including Morris, regularly get boosts even larger than that in regular years. Tellingly, only one of the 35 was able to clear 75% on their last year on the ballot: Jim Rice. (However, eight more are Hall of Famers anyway thanks to the Veterans Committee. This also makes this whole conversation kind of academic, since this precedent virtually assures that Morris will get in someday.)

However, there is a lot of variance in the size of 15-year bumps. They have historically been as small as a decline of 7.3 points (poor Al Dark in 1980) or as large as Gil Hodges's boost of 14.0 points in 1983. (Morris needs a bump of 7.3 points, something that has occurred six times.) Although the pattern is unclear, there is some reason to think that the bumps are larger when a player is closer to induction. Here is a scattergram of the 35 players' 15-year bumps graphed by their shares of the total vote in the previous election (their 14th year on the ballot): 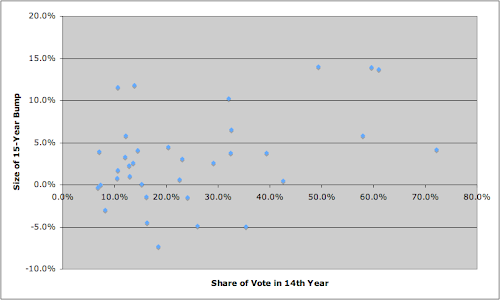 It's hardly conclusive, but the players with the biggest bumps also had the higher vote totals the year before. This makes sense: there's no need for voters to put extra juice behind the candidacies of no-hope contenders stuck in the 20s, but when a player is within striking distance of 75%, they probably recognize the stakes are higher and throw more votes his way. However, this isn't always the case; at the far right of the chart, Jim Rice got just a 4.2-point boost in 2009, though this was enough to push him over. It remains to be seen where Morris's scatterpoint will fall.

One thing the graph does imply is that, at the very least, Morris can expect not to lose support. However, on the very unusual ballot we are confronted with in 2014, that may not be assured. The presence of up to 20 Hall of Fame–worthy players means that several will be left behind thanks to the BBWAA's limit of 10 votes per ballot. Does the limit mean there will be fewer slots available on voters' ballots for Morris (and other candidates with room to grow) to hitch on?

According to the man himself (Nate Silver, not Jack Morris), the 10-man limit can hurt marginal Hall of Fame candidates. However, while Morris certainly does not enjoy universal admiration, it's not clear that he's "marginal," either. People who support Morris tend to think he's one of the most deserving players on the ballot; people who don't support him wouldn't vote for his 3.90 ERA in a million years—much less make room on their full ballots for him (many of these anti-Morris voters, because they are more empirical thinkers, also support PED users for the Hall and thus have much fuller ballots). Silver found that removing the 10-vote limit really wouldn't help Morris pick up very many votes.

Historically, the crowdedness of the ballot also hasn't really affected whether players receive a 15-year bump. As you can see below, players have received large 15-year bumps in years both when voters have had loaded ballots and when they have had room to spare. And some of the leanest years in Hall of Fame voting history produced no significant bumps: 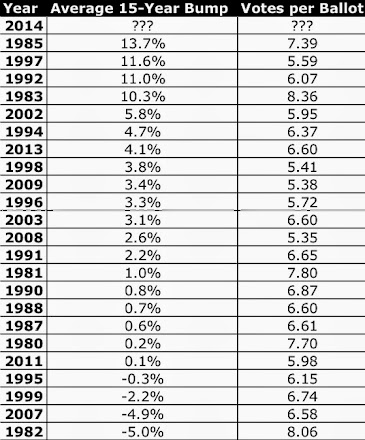 So where has this tour through Hall of Fame voting history left us? Will Jack Morris get into the Hall of Fame in 2014? The evidence, naturally, is inconclusive. Morris's personal voting history is on a trajectory to just barely get him in—though there is tons of room for error. No tiebreaker exists to make a decisive call. The prospect of his receiving a 15-year bump is dubious at best, and if he does receive one, it is unlikely to be larger than the automatic boost he's already going to get. And there is no evidence to suggest that the ballot's congestion will meaningfully eat into that boost. Like any good election, we're in for a nailbiter on January 8.

Posted by Nathaniel Rakich at 9:42 PM