All month long, I'll be using this space to rate the state of 2014's underappreciated races down the ballot. The other day I looked at lieutenant governors; in this second installment in the series, I'll look at each party's chances in the 15 races for state auditor. It's juicier than it sounds; in one race, a candidate has been scandalized by the public broadcasting of his salacious emails; in another, the Republican Party's last hold on a northeastern state is at stake; in yet another, a candidate continues her remarkable run of running unopposed for every office she has sought. Overall, 15 state auditor jobs are up for grabs this year, 10 of which are currently held by Republicans (thanks to the 2010 wave) and five of which are held by Democrats, who could take control of a majority of auditorships this year.

Without further ado, here are the race ratings for auditor; more in-depth explainers can be found after the jump. For a rundown of my methodology, see my September 26 post; for full downballot race ratings as they become available, surf to my 2014 Ratings page. 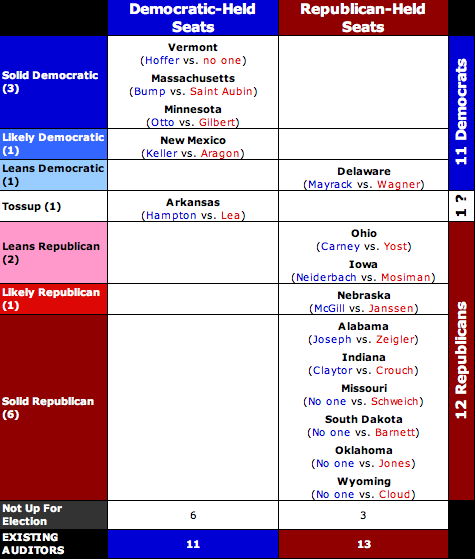 Alabama: Solid Republican
With incumbent Samantha Shaw term-limited, two people without political experience are running for the open seat. With $19,000 cash on hand between them, there won't be much of a race, so this election will default to your generic Republican-wipes-out-Democrat-by-20-points Alabama campaign.

Arkansas: Tossup
An Arkansas legend is retiring in Democratic Auditor Charlie Daniels. Democrat Regina Stewart Hampton is an employee in Daniels's office and presumably has his backing, but Republican State Representative Andrea Lea is running in a good year for the GOP. The race's single poll, from PPP, showed Lea up 35% to 31%, indicating no one but staunch partisans have made up their minds. This race will likely go how the other close Arkansas races go, with the victorious Senate and/or gubernatorial candidates pulling the auditor-to-be across the finish line. Since it's not yet clear who that will be, it's safest to consider this a tossup.

Delaware: Leans Democratic
An old-fashioned Northeast Republican, Auditor R. Thomas Wagner Jr. has been in office since 1989, but that doesn't mean he's necessarily beloved; he won by just seven points in 2006 and only a few hundred votes in 2010. Delaware liberals believe Democrat Brenda Mayrack, the former ED of the state party, is the right person to bring him down. I give the edge to the Democrat because Wagner almost lost in a more Republican year to a possible child pornographer and because, according to campaign-finance records, Wagner hasn't raised any money in 2014.

Indiana: Solid Republican
Auditor Suzanne Crouch is actually running for election for the first time, having been appointed to the job in 2013. She may as well be the incumbent, though, with her six-to-one cash-on-hand advantage over Democrat Michael Claytor. That and Indiana's Republican lean will be enough for her.

Iowa: Leans Republican
Another gubernatorial appointee, Republican Auditor Mary Mosiman is also running in her first election—but Iowa is a much swingier state than Indiana. Mosiman has run a consistent couple of points ahead of Democrat Jon Neiderbach, who has raised almost no money; it was 41% to 35% in the latest survey. Since it currently looks like the GOP will be the ones with coattails in Iowa, all signs seem to be pointing—albeit narrowly—to a Mosiman hold.

Massachusetts: Solid Democratic
While the 2010 Republican wave largely missed Massachusetts, Democrat Suzanne Bump only barely won the auditor's race, 48.6% to 46.2%. Four years later, she faces accusations that she fired a top aide after the aide objected to Bump doing political work on state time. Sounds like a recipe for an upset, right? Nope—Bump is one of the safest incumbents in the country this year. Just one of those things.

Minnesota: Solid Democratic
Republican Randy Gilbert may have had an outside chance at toppling two-term incumbent Rebecca Otto... before his sexually explicit emails got leaked. Turns out Gilbert was meeting up with a Minnesota real-estate agent for romantic trysts inside the homes the agent was showing to prospective buyers. "I may have a special place in my...for that one. :)," an email to Gilbert's account read. "When I think of ALL of the properties we have 'visited'. I shake my head and get...not what I expected when I got my license." The most suggestive bits have been cut short, much like Gilbert's chances of becoming auditor.

Missouri: Solid Republican
This one's easy—Republican Auditor Tom Schweich faces only a Libertarian and a Constitution Party candidate; it is thought to be the only time in the past century no Democrat is on the Missouri ballot.

Nebraska: Likely Republican
Democrat Amanda McGill and Republican Charlie Janssen are quite evenly matched as candidates to take over for the outgoing Mike Foley; both are members of the state legislature, and McGill has actually churned out better fundraising numbers ($143,433 raised in the cycle to Janssen's $79,581). Nebraska's red hue, though, means that McGill will really need to make a name for herself to avoid being yet another generic Democrat who goes down to defeat.

New Mexico: Likely Democratic
Even though Governor Susana Martínez is going to cruise to re-election, there's enough of a stink around her administration that being a Martínez crony—as Republican auditor candidate Robert Aragon is—will probably hurt rather than help. As Aragon is at a $3,551-to-$252,759 cash-on-hand disadvantage, it's likely that the more seasoned State Senator Tim Keller (D) has this one in the bag.

Ohio: Leans Republican
This is the rare auditor race that's a real campaign—forcing voters to pay attention. Republican incumbent Dave Yost and State Representative John Patrick Carney have slammed each other in debates, and Carney is even airing multiple ads (including one baseball-themed one). With the help of organized labor, he has outraised Yost in five of the last seven campaign-finance reports (but still trails in cash on hand, $1.6 million to $1.2 million). Downballot Democrats in Ohio have had to contend with the drag on the ticket that is gubernatorial candidate Ed FitzGerald, but Carney and treasurer candidate Connie Pillich are seen as having the best chances to overcome that. According to PPP, Yost led 42% to 40% in July, and the University of Akron found Yost up 26% to 22% in September. Carney's internals reportedly show him trailing by "only a few points"—a pretty sure sign that he's the underdog if that's the best he can report. Still, it's clear this is a real race.

Oklahoma: Solid Republican
There aren't a lot of Democrats in Oklahoma, so maybe there just weren't enough to run for every available office? None is running for state auditor and inspector, and neither is anyone else, save incumbent Republican Gary Jones. He has a 100% chance of winning.

Vermont: Solid Democratic
Despite a close race in 2012 (Vermont elects its constitutional officers every two years), Auditor Doug Hoffer (D/Prog) is unopposed in 2014.

Wyoming: Solid Republican
Capping off our streak of uncontested races is Wyoming Auditor Cynthia Cloud. First elected in 2010 without any opposition, she is also the only candidate running in 2014. That means Cynthia Cloud has never faced an opponent in her entire political career. Ah, to live in Wyoming.
Posted by Nathaniel Rakich at 8:12 AM