Happy Election Day, baseball psephologists! One of the closest Baseball Hall of Fame elections in memory wraps up this evening at 6pm on MLB Network, when players from Edgar Martínez to Billy Wagner will learn whether they've been selected for baseball's highest honor.

...Except we already know that neither Martínez nor Wagner is going to get in. Each year, Ryan Thibodaux sacrifices his December and January to painstakingly curate a list of all public Hall of Fame votes so that the rest of us know roughly where the race stands. But Thibodaux's BBHOF Tracker is just that: rough. Many Hall of Fame watchers—Scott Lindholm, Ben Dilday, Jason Sardell, and yours truly—have developed FiveThirtyEight-esque election models, treating the Tracker data as "polls," to predict the eventual results. My model, which is in its fifth year, adjusts the numbers in the Tracker up or down, depending on whether a given candidate has historically under- or overperformed in public balloting. You can read my full methodology over at The Hardball Times.

With the big day upon us, it's time for me to issue my final Hall of Fame projections of 2017. While it is possible–even probable—that a couple more public ballots will be revealed before 6pm, the below numbers are accurate as of 5:55pm on Wednesday, when 250 ballots were publicly known. I will update this post as necessary leading up to the announcement.

Bagwell and Raines are virtual locks for election. At a projected 83.9% and 83.5%, respectively, they are so far ahead of the required 75% that it would take a massive error to keep them out. By contrast, Hoffman and Pudge fans should be on the edge of their seats. Although their 75.9% and 76.0% projections are just over 75%, they would require only a single-point error in my forecast to put them under it instead. (This is entirely possible; no predictive model can be perfect. Last year, my model was off by an average of 1.5 points for each candidate, and in one case it was off by 3.5 points.) Hoffman's and Rodríguez's chances are better thought of as too close to call.

Guerrero is also close enough to 75% (72.3%) that he can't be ruled out for election either. As a first-year candidate, my model doesn't have much precedent to go off when making his prediction, so there is greater-than-usual uncertainty surrounding his fate. My model sees Guerrero as the type of candidate who gains votes on private ballots, but the magnitude of that gain could vary greatly. In this way, Guerrero could lift himself up over 75% without a huge amount of effort.

Perhaps the best way to think about this Hall of Fame election is to consider Hoffman, Pudge, and Vlad all as coin flips. (There's not much practical difference between having a 51% chance of winning a game and a 49% chance, even though those two sets of odds indicate different favorites.) On average, if you flip three coins, you will get 1.5 heads (well, OK, either one or two). Add that to the two virtual locks, and you're looking at an over-under of 3.5 inductees. While I am predicting four players elected, three is almost as likely.

Further down the ballot, I'm projecting Barry Bonds to reach 59.3% and Roger Clemens to reach 59.2%. Although this is well short of election, it's an astounding, nearly 20-point gain from last year's totals. If they do indeed break 50%, history bodes very well for their eventual election. Ditto for Martínez, who, at a projected 63.5%, appears to be on deck for election either in 2018 or 2019. Mike Mussina is tipped to hit 53.0% this year, also above the magic 50% threshold. He appears to have overtaken Curt Schilling as the ballot's premier starting pitcher; my model predicts Schilling will drop to 44.2% from his 52.3% showing last year.

Finally, two serious candidates are expected to drop off the ballot. The obvious one is Lee Smith, whose projected 35.3% matters less than the fact that this is his 15th, and therefore automatically last, year on the ballot. At the very bottom of my prediction sheet, Jorge Posada is currently expected to get 4.3% of the vote. Like with Hoffman/Rodríguez/Guerrero and 75%, this is well within the margin of error in terms of its closeness to 5%, the minimum number of votes a player needs to stay on the ballot. Whether Posada hangs on or not is the other major uncertainty tonight; my model currently thinks he's slightly more likely to drop off than stick around.

You can view my full projections on this Google spreadsheet or archived below for posterity. After the election, I'll write an analysis of how my (and others') prediction models did. Until then, all we can do is wait! 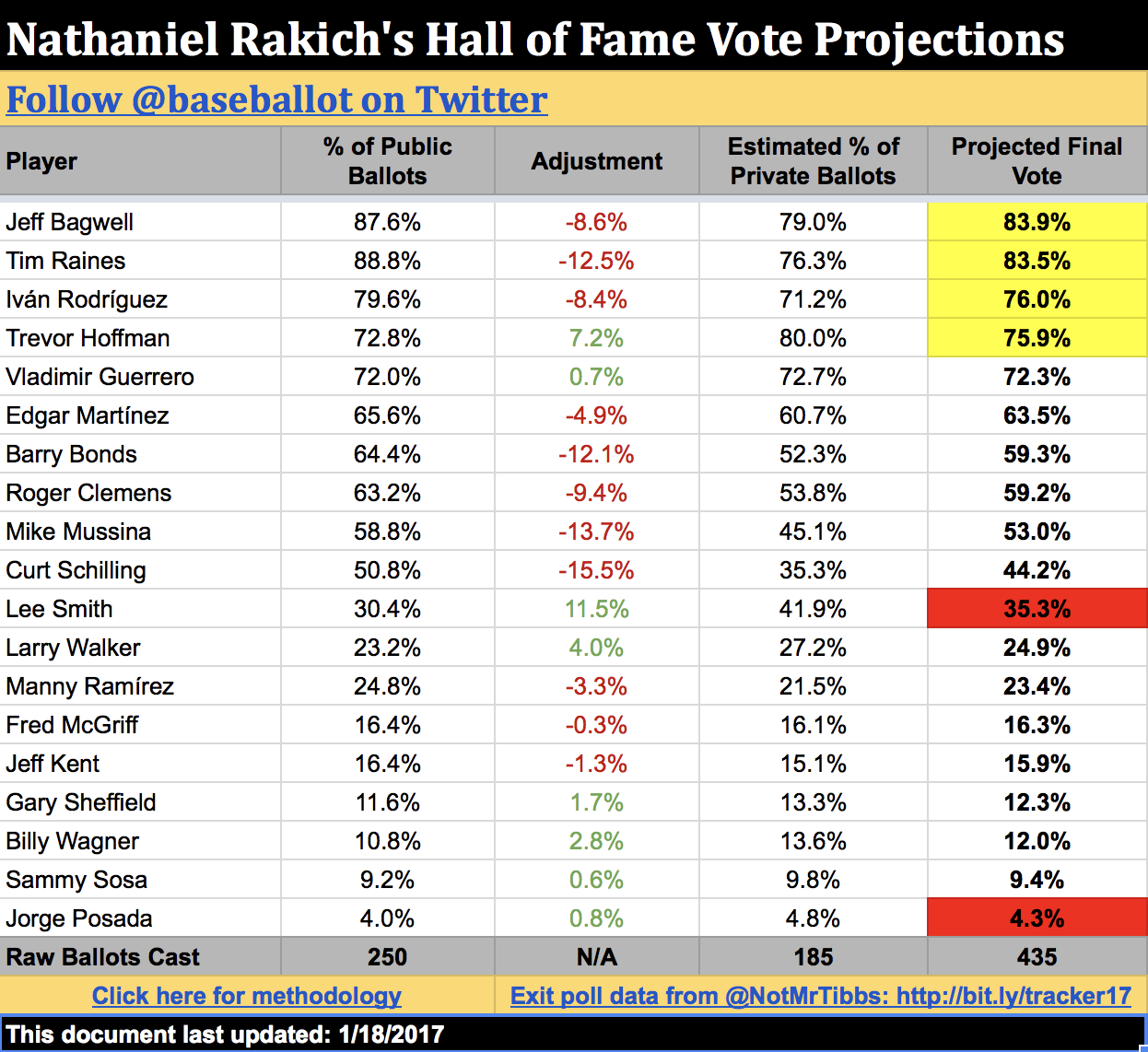 Posted by Nathaniel Rakich at 2:48 PM